Update Required To play the media you will need to either update your browser to a recent version or update your Flash plugin.
By Bryan Lynn
10 August 2021


An American diplomat has warned the Taliban that its military campaign to control Afghanistan will not result in a government that is recognized internationally.

The diplomat, Zalmay Khalilzad, gave the warning Tuesday to Taliban representatives in Doha, Qatar. The Taliban has a political office in Doha.

Khalilzad has led U.S. peace efforts related to Afghanistan for several years. He and others hope to persuade Taliban leaders to return to peace talks with the Afghan government.

But the Taliban has intensified military efforts in recent weeks to take control of wide areas of the country. The group's new campaign followed the U.S. decision last month to end its military activities in Afghanistan by the end of August. 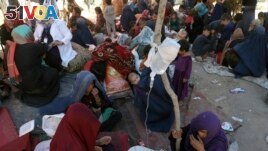 Internally displaced Afghan women from northern provinces, who fled their home due to fighting between the Taliban and Afghan security personnel, receive medical care in a public park in Kabul, Afghanistan, Tuesday, Aug. 10, 2021. (AP Photo/Rahmat Gul)

Most recently, Taliban fighters captured six out of 34 provincial capitals in less than one week. They included Kunduz -- one of the country's largest cities -- in Kunduz province.

The Taliban is now battling the Western-backed Afghan government for control of several other provinces in the south. On Tuesday, Taliban forces entered Farah and were seen in front of the provincial governor's office.

The fighting has driven thousands of people to Kabul, where many are living in open areas in the city.

The latest Taliban gains have led to new efforts to restart peace talks aimed at ending the fighting. The goal is to begin a process to create an agreement for a power-sharing government. The Taliban has so far refused to return to peace negotiations.

The new pressure from Khalilzad follows condemnation of the Taliban's moves by the international community. The United Nations has also warned the Taliban that any government that takes power by force will not be recognized.

The U.S. State Department said in a statement Khalilzad's mission in Qatar is meant to "help formulate a joint international response" to the current situation. The diplomat plans to "press the Taliban to stop their military offensive and to negotiate a political settlement," the statement said.

The Taliban's military chief released an audio message to his fighters on Tuesday, The Associated Press reported. The message ordered the fighters not to harm Afghan forces or government officials in territories they seize.

The five-minute message was recorded by Mohammad Yaqoob, son of the late Taliban leader Mullah Mohammad Omar. It instructed the rebels to stay out of empty homes belonging to government officials, to leave marketplaces open and to protect places of business, including banks.

It remains unclear, however, whether Taliban fighters would obey the orders. Some civilians who have fled Taliban forces have said they had put repressive restrictions on women and burned down schools.

The office of the U.N. human rights chief said it has received reports of executions, revenge killings and military use and destruction of homes, schools and medical centers.

Many civilians have been killed or injured in the fighting. The U.N. human rights chief, Michelle Bachelet, said Tuesday her office had counted at least 183 deaths and hundreds of injured among civilians in several cities in recent weeks.

formulate – v. to develop all details of a plan for doing something

response – n. an answer of reaction to something that has been said or done

revenge – n. something that is done to punish someone who has done something bad to you