Update Required To play the media you will need to either update your browser to a recent version or update your Flash plugin.
By Christopher Jones-Cruise
27 April, 2016


The United States government is urging Vietnam to release all political prisoners and end its poor treatment of civil society activists.

US officials made the appeals before President Barack Obama's first visit to Vietnam. He will travel there in May.

A State Department official noted "the promotion of human rights remains a crucial part of U.S. foreign policy and is a key aspect of our ongoing dialogue within the U.S.-Vietnam comprehensive partnership."

On Monday, the two nations held their 20th in a series of meetings, known as the Human Rights Dialogue. The talks took place in Washington, D.C. 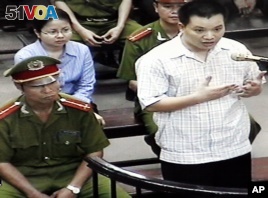 The State Department said the two sides talked about a number of human rights issues during the meeting. These included the importance of continued progress on legal reform efforts, the rule of law, freedom of expression and assembly, and religious freedom. They also talked about labor rights, disability rights, and cooperation between the two countries.

In December, the State Department urged Vietnamese officials to make sure their actions were in agreement with international treaties. It also called on Vietnam to "release unconditionally all prisoners of conscience."

U.S. officials are also worried about blogger Nguyen Huu Vinh, also known as Anh Ba Sam. He was sentenced to five years in prison for what Vietnamese officials called "abusing rights to freedom and democracy to infringe upon the interests of the state."

The State Department noted several concerns about Vietnam in its 2015 Country Report for Human Rights Practices. These problems included "severe government restrictions of citizens' political rights; limits on citizens' civil liberties; and failing to protect citizens' rights to due process, including protection against arbitrary detention."

Vietnamese newspapers and television stations face press and media restrictions. But U.S. Deputy Secretary of State Antony Blinken said the country's human rights policies have improved. He said Vietnam has promised to make sure its laws give the same protections as international human rights laws and treaties.

During a recent visit to Hanoi, Blinken noted that Vietnam had approved the Convention against Torture and the UN Convention on the Rights of Persons with Disabilities.

He also said that Vietnam was giving permission for independent trade unions to be created "for the first time in modern history." And he noted that the Vietnamese government is taking steps to talk with religious and civil leaders as it writes a new law on religious freedom.

The United States hopes the law will protect the rights of people of different faiths.

VOA's Nike Chang reported this story from The State Department. Christopher Jones-Cruise adapted her report for Learning English. George Grow was the editor.

promotion – n. the activity of helping something to happen, develop or increase

dialogue – n. (formal) a discussion or series of discussions that two groups or countries have in order to end a disagreement

comprehensive – adj. including many, most or all things

prisoner of conscience – n. someone who is held in prison because of his or her political or religious beliefs

infringe – v. to wrongly limit or restrict (something, such as another person's rights)

due process – n. the official and proper way of doing things in a legal case; the rule that a legal case must be done in a way that protects the rights of all the people involved

arbitrary detention – n. the jailing of a person without concern for what is fair or right