US Warns of 'Imminent' Attack in Kabul

Update Required To play the media you will need to either update your browser to a recent version or update your Flash plugin.
By VOA
30 November, 2015


Officials say they have "credible reports of an imminent attack" on American assets in the Afghan capital Kabul.

The American Embassy released an emergency message on Monday. The message said American citizens should be very careful if traveling in the city. It said the embassy did not have "further details regarding the targets, timing or method of the planned attack."

And it again warned U.S. citizens not to travel to Afghanistan.

Because of increasing insecurity in Kabul, the embassy no longer lets its workers travel by vehicle. They must use helicopters instead. 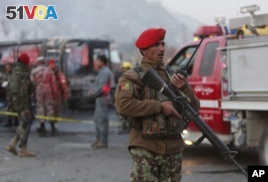 An Afghan soldier stands guard by a damaged bus at the site of a suicide attack by the Taliban in Kabul, Afghanistan, December 2014. Officials warn of similar violence this week and have alerted U.S. citizens in Afghanistan. (AP Photo/Rahmat Gul)

Workers at embassies of other countries and international aid groups have put similar policies in place. They want to decrease their vulnerability to attacks as they travel among secure parts of the city.

On Saturday morning, a senior Afghan election official survived a suicide bombing against his vehicle in Kabul that killed his driver and wounded a guard. The reason for the attack is not known.

But Taliban militants have increased their attacks on Afghan security forces and government officials. The attacks are believed to be part of the Taliban's violent anti-government campaign across the country.

The embassy releases emergency warnings often. But this warning was released as the leaders of Afghanistan and Pakistan were expected to meet in Paris at a United Nations gathering on climate change.

If the meeting between Pakistani Prime Minister Nawaz Sharif and Afghan President Ashraf Ghani takes place, it could be an important first step in peace talks with the Taliban. Pakistan is working with leaders of the group and Afghan government officials to reach an agreement to end the fighting in Afghanistan.

assets -- n. people and facilities, in this case

credible – adj. able to be believed; reasonable to trust or believe

facilities – n. something (such as a building or large piece of equipment) that is built for a specific purpose

secure – adj. protected from danger or harm; guarded so that no one can enter or leave without approval