Update Required To play the media you will need to either update your browser to a recent version or update your Flash plugin.
By VOA
15 May, 2015


Experts say that sun and wind are the richest sources of clean, renewable energy. But ocean waves also create powerful, clean energy. So, the U.S Department of Energy has announced a $1.5 million-dollar prize for the winner of a competition on how to capture that energy.

The Department of Energy says that waves and tides along U.S. coasts create about 1,420 terawatt-hours of energy a year. That is equal to the amount of energy produced by more than 330 nuclear power factories.

But today's technologies can only capture about 20 percent of the energy from ocean waves. Jose Zayas is the director of the Wind and Water Power Technologies Office at the Department of Energy. He says 20 percent is too low for an investment in ocean wave energy to be economical. He says it needs to be up in the high 30 percent to 40 percent. 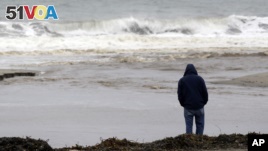 "...we believe that once you achieve that then the economic competiveness of this industry really comes to life and that's really the target that we are shooting for."

The Department of Energy has launched the Wave Energy Prize competition to encourage development of new technologies.

But developing new devices to capture wave energy can be difficult. Wave capture machines must operate in oceans

Competition organizers expect most of the new ideas to come from established energy companies as well as some universities and research centers. Mr. Zayas says testing the new technologies will be done in several steps using scaled models. A scaled model is a smaller form of a larger object or structure.

"We would have 1/50th scale testing where we would do the first fundamental evaluation of their performance, as well as making sure that they are on a pathway that can assure them success towards a prize...and near the end, we will have about 10 teams, it is our hope."

The competition will not require the machines to produce electrical power. He says changing the mechanical kinetic energy into electrical energy is easy.

Mr. Zayas says the main goal of the Wave Energy Prize is to develop a new set of power producing technologies for the future. Developers of the best performing devices will receive prizes from $250,000 to as much as $1.5 million.

assure – v. to make something certain

encourage – v. to make someone more determined, hopeful or confident

kinetic – adj. of or relating to the movement of physical objects

terawatt - n. a unit of power equal to one trillion watts