Update Required To play the media you will need to either update your browser to a recent version or update your Flash plugin.
By VOA
07 August, 2014

As many as 40,000 people are reported trapped on a mountaintop in northern Iraq. They have little food or water.

A spokesman for President Barack Obama said "the situation is nearing a humanitarian catastrophe." But the spokesman noted, "there are no American military solutions to the problems in Iraq."

A State Department official said the U.S. is looking at a number of possible actions and "actively considering" what else it can do.

A Defense Department official said that the U.S. is "working urgently and directly with officials in Baghdad and Irbil to coordinate Iraqi airdrops to people in need."

Pope Francis appealed to the international community to help end what he called the "humanitarian tragedy" in Iraq. 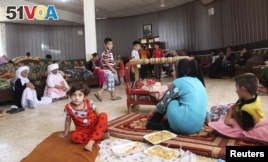 The court found the two defendants, Khieu Samphan and Nuon Chea, guilty of crimes against humanity. The two showed little emotion as their sentences were read.

The court ruling came more than 35 years after the fall of the Khmer Rouge. The group has been blamed for the deaths of one-fourth of the Cambodian population.

NATO to Russia: Step Back

NATO Secretary-General Anders Fogh Rasmussen has warned Russia against an invasion of Ukraine. He also called for an immediate withdrawal of troops along the border between the countries. In his words, "Step back from the brink, step back from the border and [do] not use peacekeeping as an excuse for war-making."
Mr. Rasmussen spoke during a visit to Kyiv.

Now it's your turn to use these words in the news. In the comment section, write a sentence using one of these words and we will provide feedback on the use of vocabulary and grammar.