U.S. Works to Protect Itself from Next Big Storm

Update Required To play the media you will need to either update your browser to a recent version or update your Flash plugin.
By VOA
01 July, 2014

Nearly two years have passed since Hurricane Sandy struck the Northeastern United States. Water levels rose almost four meters in some areas as the storm moved inland from the Atlantic Ocean. It caused major property damage along the Northeast coast. 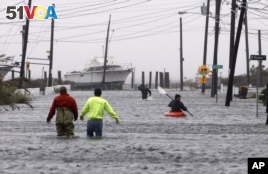 Since then, the federal government has promised $920 million for a program to help plan for the next major storm. The program is called "Rebuild by Design." It is bringing together experts on water control from around the world, and is welcoming ideas from storm survivors.

Now, a team of experts from 11 countries is working on six projects to limit damage from the next big storm.

Amy Chester is executive director of Rebuild by Design.

"The first part that's getting funded is the Lower East Side and that's East River Park. And they are looking at the park not only as a park, but a burm. So a burm would protect the community, but it also will create a space, create new space for recreation 365 days a year."

A project team called the "Big U" developed the plan to protect the Lower East Side of Manhattan. Hurricane Sandy flooded much of the area, displacing many families. The recovery is continuing.

Bjarke Ingels is a Danish architect who is working on the project.

"Think of it as a string of pearls that constantly changes shape and form and character. And for each part of the Big U, we've had intensive meetings with the local communities and they've told us what they wanted, which things they were missing, which things they were afraid of. Then we designed the flood barrier in a way that it also becomes pavilions for markets or different sort of public amenities."

Damaris Reyes is the executive director of a group called GOLES. Its name comes from the words Gold Old Lower East Side. Ms. Reyes says the Big U design team listened to what she and her neighbors had to say.

"They know that we were part of this broader coalition that was really representative of community folk and they came to us and asked to work with us."

The Big U project is the first link in a series of barriers that will protect almost 13 kilometers of the coastline -- from one side of the city to the other.

Holly Licht is a government administrator who is working on the project. She says she looked all over the world for ideas.

Completing the plans may not be the hardest part of the project -- the Rebuild by Design team will have to work with federal agencies, and city and state governments to get their approval to carry them out. I'm Jonathan Evans.