Experts: US Would Not Need South Korea's OK to Strike North

Update Required To play the media you will need to either update your browser to a recent version or update your Flash plugin.
By John Russell
25 August, 2017


South Korea's President Moon Jae-in says military action against North Korea cannot be carried out without his government's permission. However, former United States military commanders have a different opinion about the situation.

For weeks, U.S. President Donald Trump and North Korean leader Kim Jong Un have been exchanging threats. Through it all, South Korean President Moon Jae-in has said that he would stand in the way of another battle on the Korean peninsula.

According to Moon, who has long advocated for communication with North Korea, "Military action on the Korean Peninsula can only be decided by South Korea, and no one else can decide on a military action without South Korean agreement."

Trump, however, has not ruled out unilateral military action by the United States.

Last month, North Korea launched two intercontinental ballistic missile (ICBM) tests in the waters near Japan and South Korea. The test missiles, experts say, had the range to reach the United States. And the North has also threatened to launch missile tests around Guam, a U.S. territory in the Pacific Ocean. 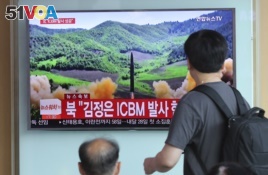 People watch a TV report showing what was said to be the launch of a North Korea's ICBM, aired by North Korea's KRT, at Seoul Train Station in Seoul, South Korea, July 4, 2017.

General Burwell Bell is a retired Army General. He commanded U.S. forces in Korea from 2006-2008. "The United States retains the authority, capability and responsibility to defend itself from attack by anyone, including North Korea," he said.

"In accordance with international law, the United States would not need South Korean approval [or] cooperation to strike the North with our own offshore military assets," the general said. "Those assets could be launched from the continental United States, Hawaii, Alaska, Guam, and the high seas near North Korea."

Bell added that he believed President Moon would support the United States.

David Maxwell is a retired colonel who commanded Army special forces units. He noted that the U.S. would certainly consult with South Korea before acting against the North. Such consultations would allow military forces to be ready for a counterattack by the North.

"The United States and South Korea are close allies sworn to uphold each other's security, and certainly the U.S. is committed to South Korea's security on the peninsula," said Michael O'Hanlon, a foreign policy expert at the Brookings Institution.

"As such, it makes little sense for America to propose or take independent action against North Korea, given how dramatically such action could implicate and endanger South Korean territory."

VOA Korean's Baik Sungwon first reported on this story; Jenny Lee contributed to it. John Russell adapted it for Learning English. Hai Do was the editor.

peninsula – n. a piece of land that is almost entirely surrounded by water and is attached to a larger land area

unilateral – adj. involving only one group or country

offshore – adj. located in the ocean away from the shore

consult – v. to talk about something with (someone) in order to make a decision

uphold – v. to support or defend (something, such as a law)