Update Required To play the media you will need to either update your browser to a recent version or update your Flash plugin.
By Ashley Thompson
04 September, 2018


The president of USA Gymnastics, Kerry Perry, resigned under pressure Tuesday. The move came days after the U.S. Olympic Committee questioned her ability to lead the organization.

Perry spent nine months as president. During that time, she faced criticism from current and former athletes over how she was dealing with issues surrounding one of America's biggest sexual abuse scandals in history.

USA Gymnastics' longtime team doctor, Larry Nassar, is said to have abused more than 300 women and girls over a 30-year period. 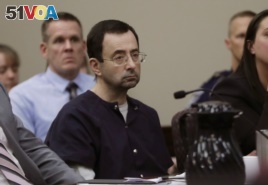 In this Jan. 24, 2018, file photo, Larry Nassar sits during his sentencing hearing in Lansing, Mich.

Nassar stopped working with USA Gymnastics in 2015. He is serving an effective life sentence in prison for sexually abusing patients during medical treatment and for possessing sexual images of children.

When Perry took the job last December, she said her aim would be to create "an environment of empowerment where all have a strong voice."

But last week, USA Gymnastics faced criticism after the hiring of a coach for a high-level athlete development position. The coach, Mary Lee Tracy, publicly supported Nassar when abuse claims against him first appeared in the media two years ago.

Tracy told one reporter that Nassar was an "amazing" doctor to her athletes. Her comments came after 50 women had said they were abused by Nassar.

Olympic gold medalist and abuse survivor Aly Raisman wrote on Twitter, "This is a slap in the face for survivors, and further confirmation that nothing at USA Gymnastics has changed."

Tracy then reportedly made an effort last week to contact Raisman to apologize.

USA Gymnastics answered that attempt by asking Tracy to step down. The organization said Tracy had "inappropriately contacted a survivor."

Raisman is one of many abuse survivors suing USA Gymnastics. The USA Gymnastics request for Tracy to resign was likely done to protect the organization legally.

The move brought a new wave of negative media attention. The newly hired chief of the U.S. Olympic Committee, Sarah Hirshland, published a statement about USA Gymnastics Friday. She wrote that "it is time to consider making adjustments in the leadership."

Hirshland said the USOC would speak with USA Gymnastics representatives over the weekend. The discussion ended with Perry stepping down.

It is unclear how much of an effect Perry had in helping USA Gymnastics set a new path. Many of the moves Perry announced during her time as president came only after strong public pressure.

In January, for example, USA Gymnastics canceled its agreement to buy the Karolyi Ranch in Texas. The site had been a longtime training center for the women's national team. Many former team members have said Nassar repeatedly sexually abused them there.

But that decision came only after Olympic champion Simone Biles said she was abused by Nassar at the Ranch and questioned why she would have to return there to train.

Perry made few public statements during her nine months with USA Gymnastics. She appeared at a congressional hearing to discuss the future of the organization and how it handled claims of sex abuse. Her answers, however, offered few details.

At last month's national championships, Biles noted Perry's lack of communication. When reporters asked her if she felt Perry should speak up more, Biles answered, "Yes, it's her job."

Will Graves reported this story for the Associated Press. Ashley Thompson adapted it for VOA Learning English. Hai Do was the editor.

slap in the face - expression. something that is upsetting to someone because it shows a lack of respect or support

inappropriately - adv. not right or suited for some purpose or situation

sue - v. to use a legal process by which you try to get a court of law to force a person, company, or organization that has treated you unfairly or hurt you in some way to give you something or to do something

adjustment - n. a change that makes it possible for a person to do better or work better in a new situation