Use Fewer Words but Say More

Update Required To play the media you will need to either update your browser to a recent version or update your Flash plugin.
By VOA
01 November, 2018


American comedian George Carlin is remembered for telling jokes about politics, religion and even the English language. He used humor to express his dislike of things such as misused words and the overuse of common expressions.

One of his pet peeves was when television reporters and program hosts used redundancies. The word "redundancy" has a few meanings. The one we will explore today involves use of a word or phrase that repeats something else and is not needed.

Carlin made fun of redundant phrases such as "honest truth" "plan ahead" and "join together" in his stand-up comedy act and books. 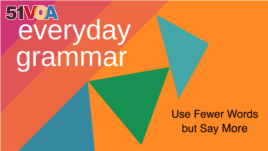 On this Everyday Grammar program, we will talk about common redundancies and suggest ways to avoid them in writing.

English speakers often speak in a repetitive style. It is so deeply ingrained in us that we rarely notice it. In fact, I just used a somewhat redundant phrase: deeply ingrained.

So why do English speakers use redundancy? Well, we sometimes do it for emphasis. One might say, "Personally, I would rather go to the parade." The word "personally" is unneeded but makes a stronger statement.

Redundant language also is used in some forms of writing, such as literature, speech writing and legal writing.

But in other kinds of formal writing, redundancy is not a good idea. That includes school-related and business writing. It can weaken statements and make readers lose interest in the subject.

"Less is more" is a good rule to follow as one attempts to produce quality written work.

So now let's explore five common redundancies to look out for.

The first one is in setting up examples.

In formal writing, we use phrases like "for example" "for instance" and "such as" to present examples. So, adding the phrases "and so on" "and more" or the Latin term "et cetera" to a list of examples is redundant.

Here is an example of what to avoid:

Carlin often joked about redundant phrases such as "honest truth" "plan ahead" and "join together" and more.

You can rewrite it by removing the phrases "such as" or "and more." You don't need both.

Another problem happens when trying to present additional information on a subject.

When starting a sentence with phrases such as "in addition to" "like" or "also," one should avoid using one of these same phrases in the statement. Here is an example of what not to write:

In addition to condemning the violence, they also protested the new policies.

You should remove the word "also" in the second part of the sentence since "in addition to" already expresses the idea of "also."

Another problem is what are called "redundant pairs" -- two words that together suggest each other. This includes a phrase such as "future plans." We know, for instance, that "plans" are about the future.

"End result" and "final outcome" are other examples.

Redundant pairs can also involve putting a useless preposition after a verb. Think of the phrase "protest against." The verb "protest" already expresses the idea of being "against" something.

Another kind of redundancy is the overuse or misuse of adverbs.

The adverbs "very," "really," "extremely" and "incredibly" are examples of intensifiers. They make adjectives stronger. Intensifiers are often not a wise choice for formal writing, however.

"Very unique" is an example of a misused intensifier. The word "very" is redundant because "unique" means "very special or unusual."

Other adverbs are simply needless. Two such examples are the phrases "shouted loudly" and "completely destroyed." We know that destruction suggests total ruin and shouting refers to being very loud.

Writers in English are also guilty of wordy time-related phrases.

For example, the phrase "period of time" and "time period" are redundant since "period" refers to a measure of time.

Now, let's hear an example of a sentence that uses more words than necessary to express an idea. It comes from the Purdue University Online Writing Lab:

Before the travel agent was completely able to finish explaining the various differences among all of the many very unique vacation packages his travel agency was offering, the customer changed her future plans.

And here is how Purdue suggests rewriting it:

Before the travel agent finished explaining the differences among the unique vacation packages his travel agency was offering, the customer changed her plans.

The rewritten sentence is shorter and clearer.

Here are three things that may help you avoid redundancy in formal written work:

First, plan time to write. This will give you space to carefully examine and rewrite your work until you are satisfied with the result. Starting a formal writing task late is never a good idea.

Choose your words wisely. As you write, use words that help remove redundant language. Instead of writing "very tired," for instance, write "exhausted." Instead of "looked closely," you might write "examined."

And, finally, avoid fillers – words and phrases that add no meaning but just fill space, such as wordy time phrases. Supervisors and professors usually disapprove of and can easily identify fillers.

pet peeve – n. something that annoys or bothers a person very much

host – n. a person who talks to guests on a television or radio show

emphasis – n. a forceful quality in the way something is said or written

task – n. a piece of work that has been given to someone