Study: Use of Antibiotics in Farm Animals Expected to Grow

Update Required To play the media you will need to either update your browser to a recent version or update your Flash plugin.
By Christopher Jones-Cruise
10 April, 2015


A new study has found the amount of antibiotics given to farm animals is expected to increase by two-thirds over the next 15 years. Researchers are linking the growing dependence on the drugs to rising demand for meat, milk and eggs. The researchers warn the drugs could quicken the development of antibiotics-resistant infections. Such infections are already a major public health concern in the United States.

Experts say when people stop living in poverty, the first thing they want to do is eat better. For most people, that means eating more meat.

Increasing prosperity in Asia has meant people there are eating nearly four times as much meat, milk and dairy products as they did 50 years ago.

To meet that demand, farms have put many animals into smaller spaces.

Gail Hansen is a veterinarian -- a doctor who treats animals -- with the Pew Charitable Trusts, a research and advocacy group.

"As the animals are crowded together, oftentimes the easiest way to deal with some of the problems of crowding is to give them antibiotics."

Dr. Hansen says antibiotics help the animals stay healthy in crowded environments and grow faster. But bacteria can develop resistance to the drugs, and that now-resistant bacteria can spread to people. 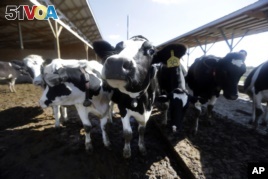 FILE Photo Oct 16, 2013 - The use of antibiotics in livestock helps the animals stay healthy and grow faster, but bacteria develop resistance to the drugs, and those resistant bacteria can spread to people.

Doctors find that antibiotics that once worked against the infections no longer do. The bacteria have learned ways to fight the medicine. Doctors say the heavy use of antibiotics in animals is one of several reasons for the growth of antibiotic resistance worldwide. In the United States, at least two million people get drug-resistant infections each year. At least 23,000 die from an infection.

Ramanan Laxminarayan heads the Center for Disease Dynamics, Economics and Policy. He says the problem is expected to get worse. He believes the use of antibiotics in animals will soon increase sharply. He says that will not be good for human health.

He and other researchers wrote a report on the study, which was published in the Proceedings of the National Academy of Sciences. They used data from the United Nations that tell how and where livestock are raised today. They then predicted how such production would change by 2030.

"The increase in demand is going to make agriculture shift to more intensive methods of production, which tend to use greater quantities of antibiotics."

The researchers estimate a 67 percent increase in total antibiotics use in livestock worldwide. They believe such use will double in what they call middle-income countries like China, India and Brazil.

But Dr. Hansen says it does not have to be that way.

"The developing world doesn't have to make all the same mistakes that we made -- ‘we' being the United States and Europe."

She notes that Europe has banned the use of antibiotics to increase animal growth. And she adds the United States is hoping to persuade farmers to stop using antibiotics for that purpose.

resistant – adj. not affected or harmed by something

poverty – n. the state of being poor

prosperity – n. the state of being successful, usually by making a lot of money

crowded – adj. filled with too many people or things

data – n. facts or information used usually to calculate, analyze or plan something

shift – n. a change in how something is done or how people think about something

quantities/quantity – n. an amount or number of something

double – v. to cause (something) to become two times as great or as many

purpose – n. the reason why something is done

Are antibiotics given to livestock in your country? We want to hear from you. Write your thoughts in the comments section.