Use of Mass Transit Is Highest in Nearly 60 Years

Update Required To play the media you will need to either update your browser to a recent version or update your Flash plugin.
By VOA
24 August, 2014


A record number of Americans are moving into cities. When they move into urban areas, they drive less. New York City is one of the top cities for new people and for users of mass transit.

There are about 3.4 billion rides on New York City subways and buses every year. That is about one-third of all mass transit trips in the United States.

Gene Russianoff is a spokesman for the Straphangers Campaign. The group supports people who take public transportation. He says younger Americans are causing the rise in mass transit use.

"Millenials -- those people born around the turn of the past century --are much less car-oriented. They are urban. They like not owning cars, they like less responsibility and there are a lot of them."

Many people, not just millenials, believe public transit is less costly than car use and is good for the environment. Richard Rudolph is the chairman of the Rail Users Network. 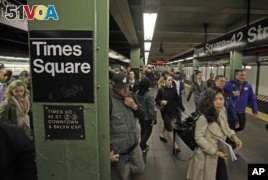 "Of course, when we talk about insurance rates going up, the price of automobiles going up, then people are finally waking up and realizing: wait a minute, here's this huge asset that's been underutilized. Why not take advantage of this particular opportunity? It certainly makes more sense to get people out of automobiles into subways and into commuter and passenger railroads."

New York City is planning several major expansions of its public transportation system. One project is a new $4.7 billion subway line. The first part of the project is set to be completed in 2016.

People who work in New York's financial area will soon be using a new subway center. Almost all of New York City's subways meet in the lower part of Manhattan. The new center will give riders an easier way to travel to the neighboring state of New Jersey.

The most costly planned project is a $7 billion tunnel connection from Long Island into Manhattan's Grand Central Terminal.

Andrew Albert is a member of the board of the Metropolitan Transit Authority. He says there are many other reasons for the increase in the use of mass transit.

"The system has gotten a lot more dependable. We have new cars. We have countdown clocks to tell you when the next train is coming. We have expanded facilities in places."

This story is based on a report by VOA reporter Bernard Shusman in New York. It was adapted for Learning English by Jonathan Evans. It was edited by Christopher Cruise.