Useful Tips and Advice for Those Applying for Student Visas

Update Required To play the media you will need to either update your browser to a recent version or update your Flash plugin.
By Dan Friedell
30 July 2022


There are several steps to getting a student visa to study in the United States. Recently, VOA Learning English spoke to Megan Mankerian-Stem about how to improve your chances of completing the process successfully.

Mankerian-Stem is the Director of International Enrollment at Creighton University in Omaha, Nebraska.

She has worked at the Midwestern university for six years and advised international students for more than 10 years. She has many stories about her students having success in the U.S. 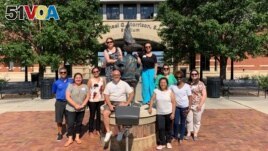 A group of international student counselors visiting Creighton University in 2022.

But, she also knows about the difficulties international students face even before getting to their first college class. In the last two years, some of the usual problems have increased because of the COVID-19 pandemic.

For example, many U.S. embassies around the world are way behind in holding visa interviews. In Abuja, Nigeria, it will take 150 days for a student visa interview.

Mankerian-Stem said students often wait too long to apply for the F-1 student visa. The F-1 visa is one of three visas that permits students to come to the U.S. The others are J and M visas, but those are not for students coming for a long-term university study program. Visas with the letter M are for job training, and visas with the letter J are for short-term academic exchange programs.

Mankerian-Stem said she recently spoke with a student from South Korea who wanted to come to Creighton. The student, however, had not yet scheduled a visa interview in Seoul.

The waiting time right now for an interview there, she said, is over four weeks. Creighton's school year starts in less than one month.

"So I had to say there's just no way that we could get you here in time for you to be able to be successful in your classes."

Mankerian-Stem said students need to start the visa process early. "You cannot afford to delay or procrastinate in any way," she said. She also advised students to work with the Education USA office in their home country and attend events where they can learn about the college and visa application process.

Most students thinking about coming to school in the U.S. today will probably not be able to start school until 2023.

Mankerian-Stem also said there are times when a student who has been accepted to study in the U.S. and who gets a visa interview is rejected by the U.S. Department of State.

Here are some of the most common reasons students are rejected:

They have not taken an English test such as TOEFL, IELTS or the Duolingo English Test; they come from a country with a high number of fraudulent applications; they say that they have family members living in the U.S.; they say they want to work in the U.S. when their studies are over.

Students from countries such as Bangladesh, Ghana, Nepal and Nigeria, she said, can be at risk for rejection. That is because others before them used false information in their applications.

Mankerian-Stem said the visas are in place so that students can come to the U.S. for a school program and then return home immediately. If a visa officer thinks a student may try to stay longer than permitted, the student can be rejected.

That can be a problem for students who want to get involved in the U.S. government program called Optional Practical Training, or OPT. OPT permits students to stay in the U.S. and work in their field of study for at least one year and possibly three after they get their degree.

Mankerian-Stem said she wants her students to have good answers ready during their interviews. She offers students the chance to practice and to speak with other international students who can advise them.

"That way they're not surprised by these types of questions and they're able to be honest, but also be very clear about what their intentions are."

Still work to be done

Mankerian-Stem said officers like herself are working to tell the U.S. State Department why students should not be rejected. For example, she noted that some schools may drop the student's English test requirement if the student has taken most of their classes in English or taken other tests that show their English skill.

"There are so many different other ways a student can prove their English language to us," she said.

She also noted that international student advisers are telling student visa application reviewers that programs, such as OPT, are important. Students should be able to speak openly about their interest in OPT during visa interviews without fear of rejection.

She said she and others are speaking with Education USA about making that point to others in the State Department.

It is worth noting that countries with large numbers of students accepted into U.S. study programs will often have special F-1 days. For example, the Financial Express newspaper of Bangladesh recently reported that the U.S. embassy sometimes holds a "super Friday." On such days, embassy workers try to help hundreds of students in need of visas in order to start their studies. The most recent was on July 29.

enroll – v. to officially join a group or organization such as a school or university

interview –n. a meeting in which some gives information about themselves

apply –v. to formally ask in writing to be admitted to a school, or to get a job or a loan

schedule –v. to plan an activity or event for a certain time

procrastinate – v. to be slow or late about doing something that you should do

fraudulent – adj. done to trick someone for the purpose of getting something valuable

practice – v. to do something again and again to get better at it

intention – n. an aim or purpose for doing something