Update Required To play the media you will need to either update your browser to a recent version or update your Flash plugin.
By Bryan Lynn
09 November 2022

Some users and experts have expressed concerns about Musk's stated plans to limit existing restrictions on user content. Musk has said his goal is to protect the free speech of Twitter users. But critics say his plan could increase the amount of harmful content and hate speech appearing on the service. 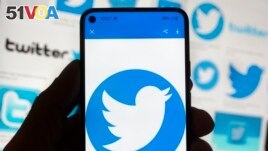 Bot Sentinel is a company that looks for inauthentic behavior on Twitter. It recently estimated the service saw 877,000 accounts deactivated between October 27 and November 1. In addition, Bot Sentinel said it identified about 497,000 accounts that had been suspended during the same period. The company's findings were reported by MIT Technology Review.

"We believe the (rise) in deactivations is the result of people upset with Elon Musk purchasing Twitter and deciding to deactivate their accounts in protest," Bot Sentinel chief Christopher Bouzy told the publication.

Musk himself tweeted that "Twitter user numbers have increased significantly around the world since the deal was announced." Musk did not provide exact numbers to support his claim.

Even if Twitter did lose nearly a million users after Musk's takeover, the social media service still remains huge. The company said earlier this year it had more than 238 million active daily users.

One of the main alternatives to Twitter is a service called Mastodon. It was created by German developer Eugen Rochko in 2016. Mastodon looks like and operates very similarly to Twitter. It lets users post short messages and other content. The service does not have advertisements.

But Mastodon is very different from Twitter because it uses a decentralized system. Each user must sign up to an independently operated server. The servers are largely run by volunteer administrators who link their systems together.

Rochko has said one goal of Mastodon is to provide the public with a social media network that does not depend on a centralized organization, like Twitter and Facebook do. The service is also designed to provide more privacy protections.

In a message posted on the service earlier this week, Rochko said Mastodon had reached more than 1 million active users in the days after Musk bought Twitter.

Ethan Zuckerman is a social media expert at the University of Massachusetts at Amherst. He wrote in a message last week, "I've gotten more new followers on Mastodon in the last week than I have in the previous five years."

Supporters of Mastodon note that no single company or person can force their will on the whole system or shut it all down. For example, they say if an extremist voice appeared on a particular server, it would be easy enough for other servers to cut ties. This would leave the account alone on the server with a shrinking group of followers.

But this shared nature of Mastodon can lead to some issues. It is generally harder to find people to follow in Mastodon's unusual system than the centrally administered offerings of Twitter.

Technical issues can also be more common on Mastodon, especially now that the service is experiencing fast growth. The design is also less developed than other services and some users have noted a more difficult sign-up process.

Content moderation is also a concern to some. This is because the process is completely run by server administrators, who get to decide what users are permitted to post.

Another alternative to Twitter is a service called Cohost, which promises its users their personal data will never be sold.

A few other start-ups are also gaining attention, including Counter Social and Tribel Social. In addition, there are the right-wing offerings such as Gab, Parler and Truth Social, the service launched by former U.S. President Donald Trump.

Bryan Lynn wrote this story for Learning English, based on reports from The Associated Press, Reuters, Agence France-Presse and MIT Technology Review.

verify – v. to prove that something is true

significantly - adv. in a way that is large or important enough to be noticed or have an effect

alternative – n. one of two or more things that you can choose between

moderate – v. to make sure the rules of an internet discussion are not broken

right-wing – adj. supporting the ideas of parties on the political right