Update Required To play the media you will need to either update your browser to a recent version or update your Flash plugin.
By Bryan Lynn
28 July, 2018


The combined California ports of Los Angeles and Long Beach are the largest in the United States.

An estimated $417 billion worth of goods pass through the two ports each year. About $362 billion of that comes from trade with the Asia Pacific area.

But businesses using the ports are expecting a sharp rise in shipping costs because of tariffs announced by the United States and China.

Liang Liang owns an import company in Los Angeles that deals mainly with toys and clothes from China. He told VOA he has had concerns about his business in recent weeks after hearing about planned tariff increases.

"I have been watching the news every day. When will the tariffs be put in place? When are my goods arriving? It's a fight against time. I'm trying to order all my products for the rest of the year."

Liang said he expects a 10- to 20-percent increase in shipping costs if a trade war breaks out between the U.S. and China. He said if tariffs were to increase more than 20 percent, he would be forced to raise the prices of his goods.

Stephen Cheung is president of the Los Angeles-based World Trade Center. The center provides assistance to international companies seeking to bring or expand operations in the area. 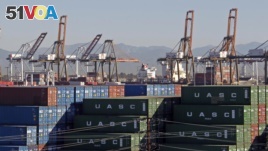 In this Feb. 12, 2015 file photo, the Port of Los Angeles, with some cargo loading cranes in the upright and idle position, are seen in this view from the San Pedro area of Los Angeles. (AP Photo/Nick Ut, File)

He said that as tariffs from both countries increase the cost of goods, manufacturers and sellers may order fewer products. This, Cheung said, would result in a decrease in overall trade between the U.S. and China.

Cheung said this rise in shipping costs would eventually result in higher prices for people buying the products.

Other officials at the ports of Los Angeles and Long Beach say it is still too early to tell what effect additional trade tariffs will have.

Duane Kenagy is currently deputy director of the Port of Long Beach. He told VOA that so far, the port has seen record container business this year. For now, Kenagy is waiting to see how different businesses change their supply operations to deal with the tariff environment. But he warned that a continuing trade war could be "devastating" to both the U.S. and Chinese economies.

President Donald Trump and other U.S. officials have accused China of carrying out unfair trading practices. The officials say tariffs are needed to reduce a large trade imbalance. The United States imported more than $500 billion in Chinese goods last year, compared to $130 billion in U.S. products exported to China.

Importer Liang Liang remains hopeful that a U.S.-China trade war can be avoided. He said he thought recent announcements on tariffs were made for political purposes and may not last.

Stephen Cheung said he understands the reasons the United States decided to announce heavy tariffs on Chinese imports. But he urged administration officials to carefully consider how such changes will affect local importers.

"What are the steps you're going to use to mitigate some of these damages that will be happening to the local community? These are huge issues that have not been addressed yet," he said.

Elizabeth Lee reported this story for VOA News. Bryan Lynn adapted it for Learning English, with additional information from other sources. Ashley Thompson was the editor.

tariff – n. tax on goods coming into or leaving a country

volume – n. the number or amount of something

justify – v. to give a good enough reason to make something seem acceptable

mitigate – v. reduce the harmful effects of something

eventually – adv. at some later time

toy – n. object for children to play with