Update Required To play the media you will need to either update your browser to a recent version or update your Flash plugin.
By Bryan Lynn
06 January, 2018


By now, most people have heard of bitcoin. Bitcoin is a virtual currency that has had a huge rise in value during 2017.

Bitcoin however is just one of many cryptocurrencies.

A cryptocurrency is a kind of money that does not exist in the form of bills or coins. It is not overseen by banks or supported by governments. It is exchanged digitally between buyers and sellers using encryption for security.

Amounts of cryptocurrency are created through a method called mining by developers. 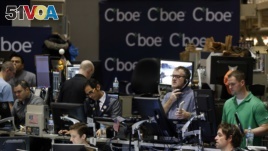 Traders work in a trading pit at the Chicago Board Options Exchange, Monday, Dec. 11, 2017, in Chicago, as they trade futures and options unrelated to bitcoin. Trading in bitcoin futures began Sunday on the CBOE. (AP Photo/Kiichiro Sato)

Mining involves users of the system lending computing power to record the exact same transactions during a certain "block" of time. This activity is called a blockchain. A blockchain is a global record of how cryptocurrencies are exchanged.

Because cryptocurrencies and blockchains are technically complex, they can be difficult to understand. This has prevented many people from using bitcoin or other cryptocurrencies.

One company is trying to change people's opinions with its new online game CryptoKitties. The game lets people use blockchain technology to buy, trade and breed virtual cats.

Axiom Zen is the company behind CryptoKitties. It says the game operates on a blockchain that uses the cryptocurrency ethereum, which is sometimes also called "ether." People use ethereum to buy CryptoKitties.

The game requires users to buy ethereum from an exchange site – such as coinbase – and then transfer amounts into a "cryptowallet" system called MetaMask. Once this is completed, people can log onto the CryptoKitties site and play the game.

The company says each kitty is unique, has a name, and is represented by a number. A new one is created every 15 minutes.

Creators of the game say one reason CryptoKitties are highly collectible is because each has its own set of genes, just like people. When players breed kitties, the newborns carry on genetic traits of the parents.

Elsa Wilk is the marketing director for AxiomZen. She says the worldwide response has been huge since the launch of CryptoKitties. One of the company's goals has been to educate people who know very little about cryptocurrencies.

"We have introduced blockchain to the masses by making the product user friendly, giving it a friendly face and really putting our own special touch on it."

But the game is not only about education and fun: people can also make a lot of money playing it.

For example, some CryptoKitties are highly collectible and sought-after. Just days after the November 28 launch, people had reportedly spent more than $2 million on the virtual kittens.

A third-party site that follows sales says several CryptoKitties sold for amounts equivalent to more than $100,000. The site noted that as of December 29, the most valuable CryptoKitty was worth more than $191,000.

Elsa Wilk agrees that money can be made from CryptoKitties. But she warns people to be careful about how much they put into any cryptocurrency. She added that it does not cost a lot to try the game.

"With CryptoKitties, we went out of our way to price the kitties in such a way that anybody can buy one. So if you have 10 dollars and an ethereum account, you can buy a CryptoKitty."

So what is next for AxiomZen after the success of CryptoKitties?

"We are working on our 2018 roadmap and we've had a number of requests for battling cats or CryptoDoggies or CryptoDinosaurs. We haven't, I would say, finalized our plans around that yet. But I can tell you that we are considering a number of options and this is definitely not the last you've heard of us."

virtual – adj. existing on a computer or the internet

cryptocurrency – n. digital currency that uses digital security measures to prevent it from being copied or misused

encryption – n. the act changing (information) from one form to another especially to hide its meaning

transaction – n. an occurrence in which goods, services, or money are passed from one person or account to another

trait – n. quality that makes a person or thing different from another