Update Required To play the media you will need to either update your browser to a recent version or update your Flash plugin.
By Faith Pirlo
03 June 2022


Hello! This week on Ask a Teacher, we will continue to answer a question from Yousra, from Egypt, about using hyphens when making compound nouns.

Hello, my name is Yousra from Egypt. 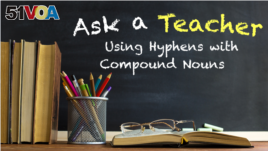 I would like to know when I should use a hyphen (-) between two words like, "top-selling" or "well-being."

Thank you for your question! In this week's program, we will learn some general rules for creating compound nouns with hyphens.

In last week's program, we talked about using hyphens to create a compound adjective. For example, top-selling, meaning, "having the most sales."

A hyphen (-) is used to combine two or more words together.

What is a compound noun?

A compound noun is two or more nouns combined to create a single noun expression. While we write most compound nouns as one word ("raindrop") or two separate words ("high school"), some compound nouns use a hyphen. For example, "well-being," or the state of being happy, healthy, or successful.

How to use hyphens to make compound nouns

1. When combining a verb and an adverb to create a compound noun, use a hyphen. The hyphen connects the adverb to the verb and not another word in the sentence. For example, let's look at the compound noun, "take-out." It means food you order from a restaurant to pick up and take with you.

Every Friday night I love getting take-out from my favorite Middle Eastern restaurant.

2. A hyphen is required for compound nouns made from two nouns. These types of nouns act as a unit, like in these examples, "English-speakers" or "hunter-gatherer."

There are over 1.5 billion English-speakers in the world!

There are many hunter-gatherer societies today that still depend on the natural environment for food.

3. Always check your dictionary if you are unsure if a compound noun requires a hyphen. There are many exceptions to these rules. And, sometimes, a word that once required a hyphen changes over time to become a one-word compound or a two-word compound.

Please let us know if these rules, explanations, and examples have helped you, Yousra.

unit – n. a single thing or a separate part of something larger

societies – n. people in general thought of as living together in organized communities with shared laws, traditions, and values