Update Required To play the media you will need to either update your browser to a recent version or update your Flash plugin.
By Dr. Jill Robbins
26 November 2021


Hello! Today on Ask a Teacher we answer a question about punctuation marks from Luay in Syria.

I hope you can tell me about the difference between punctuation marks such as the semicolon (;), the colon (:) and the comma (,) and between round brackets and square brackets. 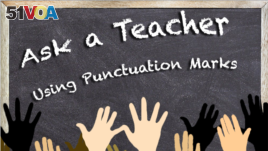 Thank you for writing with this very interesting question. Even native speakers have trouble with these punctuation marks when writing English. Let us begin with the simplest one, the comma.

First, you need to understand the sentence: it is a group of words with a subject and a verb that expresses a complete thought. Another name we give to sentences is "independent clause." That means the group of words forms a sentence by itself. As you can guess, there is another kind of word group that cannot stand alone. We call that a "dependent clause."

The most common use of a comma is to separate an independent clause and a dependent clause. When we read the examples in this lesson, we will say the punctuation marks out loud so listeners can understand where they belong.

Every Thursday, VOA has a new Everyday Grammar lesson.

The colon is two dots, one over the other. It has three main uses. One is to introduce a list of things. The part of the sentence before the colon should be an independent clause. Here is an example:

You should not use a colon when the list is part of the independent clause, as in:

Note that these things are separated by commas but there is no comma before "and." That is a debated subject we will not get into today.

You can also use a colon between two independent clauses when the second one explains the first.

We ate all of the ice cream: it was too hot this afternoon.

Third, you can use a colon to emphasize a phrase or word at the end of a sentence:

After hours of work, we saw what we wanted: a clean house.

Moving on to the semicolon, you may say it looks like a period or a dot above a comma. We use a semicolon to connect two independent clauses that have related subjects. For example,

I think we should study in the bookstore; my friend works there.

The cat came in the door; it was carrying a mouse.

The cat came in the door and it was carrying a mouse.

Your last question was about the marks you call round and square brackets. The round ones are called parentheses. We use them to add some information to help explain what we have written. When reading them aloud, we say "open parentheses" for the one on the left side and "close parentheses" for the opposite one, on the right. For example,

I opened a can of food for Makeda (the dog) and put it in a dish.

The square brackets [] have several uses. They are used to put comments or information into direct quotations, to identify errors in text, and to add more information within something that is already in parentheses. Here are examples of the brackets in action:

His mother said, "Look, this letter [it was from the university] came for you."

Alex picked up the bag (he thought it held more water [it only had empty bottles]) and shook it.

You may also see brackets around a Latin word, [sic] showing there was a mistaken word in what someone else wrote.

I hope this answers your question, Luay.

punctuation –n. the marks (such as periods and commas) in a piece of writing that make its meaning clear and that separate it into sentences and clauses