Update Required To play the media you will need to either update your browser to a recent version or update your Flash plugin.
By John Russell
08 July 2020


Scientific researchers and health officials say they can follow an outbreak of the novel coronavirus in a community by examining its wastewater. Such studies could provide a valuable addition to the tools of public health agencies, they say.

The idea is simple. Studies show that genetic material from the coronavirus can be found in the waste products of about half of patients with COVID-19, the disease caused by the virus.

Researchers can find that genetic material by doing wastewater analysis. Over time, such tests can show changes in infection rates in a community.

It should be noted that the analysis includes wastewater from people who might not otherwise be counted. Examples include people who do not get tested for the virus or do not know they are infected. The analysis can provide early warning signs of a community outbreak before people get sick enough to go to the hospital, studies show.

One Dutch study found evidence of the coronavirus in wastewater six days before the community reported its first cases.

Gertjan Medema is a microbiologist at the KWR Water Research Institute in the Netherlands. Sewage can be used as "a mirror of society," he said. "Sewage is more than just a wastewater carrier, it's also an information carrier."

Vince Hill is chief of the waterborne disease prevention office at the Centers for Disease Control and Prevention, or CDC, in the United States. He described sewage monitoring as "a very promising tool."

The CDC is now working to understand how useful it can be. "There is a lot to learn," Hill said. "We're working on this with urgency."

Wastewater has long been used to look for signs of the polio virus. With the new coronavirus, scientists are working to improve their test methods.

The Dutch, British and Italian governments have announced monitoring programs. "We can detect the virus anonymously, quickly and on a large scale," said Dutch health minister Hugo de Jonge.

In the United States, results from a two-month-long wastewater test helped persuade Utah officials to approve a larger effort that will include wastewater from 75% of the state's residents. That information came from Erica Gaddis, director of the state's Division of Water Quality. 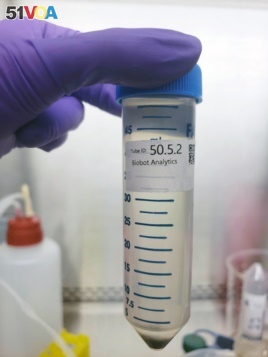 In this undated photo provided by Biobot in June 2020, a technician holds a wastewater sampling tube. Across the U.S. and in Europe, researchers and health officials say they can track the course of a community outbreak by studying the waste flushed from

Utah is not the only state to show interest in wastewater monitoring.

When the Massachusetts company Biobot said on social media that it would test wastewater for free, "it just kind of exploded," said its chief Marian Martus.

The company took on 400 wastewater processing centers in 42 states. That represents waste from about 10 percent of the U.S. population, Martus noted. The company now charges for its service, she said, and still has hundreds of people who send in water samples of about 150 milliliters.

The company does not yet have an exact way to show how many infected people are living in a community. But Biobot gives estimates, Martus said.

Peter Grevatt is the head of The Water Research Foundation. He said researchers are still working to make "sure we've got the science right."

Experts say there are many things that are unknown about wastewater analysis. For example: How can laboratory results produced by different testing methods be compared? And how are samples affected by different sewage systems?

Malcolm Ritter reported on this story for the Associated Press. John Russell adapted his story for VOA Learning English. George Grow was the editor.

outbreak – n. the sudden or violent start of something, such as the spreading of disease

otherwise – adv. in a different way

monitor – v. to watch or observe something

detect – v. to discover or notice the presence of (something that is hidden or hard to see, hear, or taste)

anonymously – adv. not named or identified; made or done by someone unknown

sample – n. a small part of piece meant to show or represent what the whole is like