US Aircraft Carrier Makes First Visit to Vietnam Since War

Update Required To play the media you will need to either update your browser to a recent version or update your Flash plugin.
By Bryan Lynn
05 March, 2018


An American aircraft carrier has arrived at a Vietnamese port for the first time since the Vietnam War.

The USS Carl Vinson arrived Monday in the central city of Danang and will remain for several days. Two other U.S. Navy ships are also visiting. The carrier has more than 5,000 crew members.

The U.S. carrier's vis it was first announced in January during a visit to Vietnam by U.S. Defense Secretary Jim Mattis. The two countries normalized relations in 1995 and have greatly expanded ties in many areas. A U.S. arms embargo was lifted in 2016.

The arrival of the USS Carl Vinson marks the biggest U.S. military presence in Vietnam since the end of the Vietnam War in 1975.

The U.S. ambassador to Vietnam, Daniel Kritenbrink, said in a statement the historic visit shows the "dramatic progress" in U.S.-Vietnamese relations in recent years. 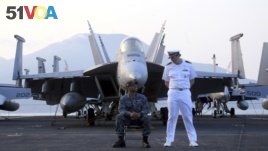 American navy officers talk to each other aboard the aircraft carrier USS Carl Vinson as it docks in Danang bay, Vietnam on Monday, March 5, 2018. (AP Photo/ Hau Dinh)

"Through hard work, mutual respect, and by continuing to address the past while we work toward a better future, we have gone from former enemies to close partners," the ambassador added.

The first U.S. Marines arrived in Danang in 1965, marking the start of major American involvement in the Vietnam War. About 58,000 American soldiers and an estimated 3 million Vietnamese were killed in the war.

Danang was a major U.S. military base during that time. It is now Vietnam's third-largest city and a place many people visit for vacation. Some city residents said they welcomed the Navy visit.

"During the war, I was scared when I saw American soldiers," 55-year-old Tran Thi Luyen told the Associated Press. He operates a small shop in the city.

"Now the aircraft carrier comes with a completely different mission, a mission of peace and promoting economic and military cooperation between the two countries," he said.

Huynh Quang Nguyen, a taxi driver, said he was "happy and excited" about the visit. "Increased cooperation between the two countries in economic, diplomatic and military areas would serve as a counterbalance to Beijing's," he said.

He was speaking about the growing influence of China across the region. China has been building up man-made islands in the South China Sea in recent years that can support military structures. The expansion has angered Vietnam and other nations in the area which also have territorial claims in the South China Sea.

Le Hong Hiep is with the Singapore-based ISEAS-Yusof Ishak Institute. He told the Associated Press the Carl Vinson's visit can be a clear sign to China that the U.S. is committed to keeping strong ties in the area.

"Although the visit is mainly symbolic and would not be able to change China's behavior - especially in the South China Sea - it is still necessary in conveying the message that the U.S. will be there to stay," he said.

Le, however, added that China knows Vietnam is not likely to side with the U.S. militarily to challenge Chinese expansion.

Bryan Lynn wrote this story for VOA Learning English, based on reports from the Associated Press, Reuters and Agence France-Presse. Mario Ritter was the editor.

mutual – adj. shared between two or more people or groups

counterbalance – n. adding balance to something by being opposite

symbolic – adj. expressing or representing something without using words

convey – v. make something known to someone

challenge – v. to say or show that something may not be true or correct