Update Required To play the media you will need to either update your browser to a recent version or update your Flash plugin.
By George Grow
31 December, 2018


Are you able to take a vacation from your wireless device?

A growing number of hotels will help you to find out.

Some hotels are offering "extras," like food and underwater diving, to people who agree give up their cellphones for a few hours. Other hotels have phone-free hours in their swimming areas. A few are even banning electronic devices from public places altogether.

Hotels that limit cellphone use risk losing publicity on social media services such as Instagram or Facebook. But they say their policies reflect their aim of promoting wellness, fun and recreation. And, they hope that hotel guests will enjoy their experience and return for future visits.

"Everyone wants to be able to disconnect. They just need a little courage," said Lisa Checchio. She is chief marketing officer at Wyndham Hotel Group.

People's inability to disconnect is an increasingly serious issue. Half of cellphone users spend between three and seven hours a day on their mobile devices. That information comes from a 2017 study by Counterpoint Research, a technology advisory service.

A separate study by the non-profit group Common Sense Media found that 69 percent of parents and 78 percent of young people said they used their devices at least hourly.

Wyndham hotel officials said they had to ask for more chairs for all the people who would sit in them and look at their phones. The hotel company found that the average guest was bringing three devices and activating them once every 12 minutes — or about 80 times a day. 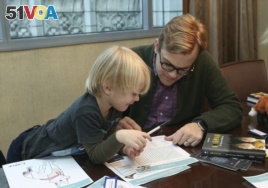 Adam Bryan and his son Wesley work together on puzzles included in complimentary backpacks provided with other incentives by the Wyndham Grand Hotel in Chicago on Dec. 1, 2018. (AP Photo/Teresa Crawford)

In exchange for leaving the phone in a soft, protected pouch, guests get good seating by swimming pools, free food and even chances to win return visits. The devices stay with the guests, but only hotel employees can open the secure pouch.

The Associated Press reported last week that 250 people have taken part in the program at Wyndham resort hotels in Florida and Texas.

Wyndham Grand resorts offered to cut the cost of a hotel stay by five percent if guests put their phones in a timed lockbox. The hotels provide treats, bedtime books and instant cameras for adults and children who are not sure what to do with all their newfound free time.

The idea appealed to Matthew Cannata. He heads public relations for the New Britain, Connecticut, schools. He worried about the effect of technology on his two young children, and he wants to keep devices out of sight during family meals.

"Any chance I can get to put the phone away is great. Sometimes, people need to be forced to do things to start a thought process and then create a habit," he said.

Hotel workers at the Grand Velas Riviera Nayarit in Mexico will remove all electronic devices from your room and replace them with traditional games, like chess.

Guests at a nearby resort trade in their phones for a bracelet placed around the wrist. The device gives them the right to take part in special activities like diving. They must do at least four activities to earn back their phones. A timer in the hotel shows how long each family has remained without their devices.

Miraval is a resort in Arizona owned by Hyatt Hotels Corporation. Miraval's goal is to increase mindfulness and create a sense of calm among their guests. Miraval, which will soon open two more resorts in Texas and Massachusetts, bans phone use in most public areas. Guests are told to put their phones into soft cotton bags and leave them on small wooden beds in their rooms.

Some resorts want a total ban on electronic devices. Wilderness Resorts, an African tour operator, provides no internet service at many of its camps. A 40-room hotel at the Siwa Oasis in Egypt lets guests have phones in their rooms, but there is no internet service or even electricity.

However, not all vacationers want to be separated from their devices. Phones can serve as cameras, music players, travel guides and e-readers. They also might be needed in an emergency.

Communications manager David Bruns uses two phones. He tries not to use his work phone when he is not on the job, but he carries his personal phone everywhere.

"I don't think I would like being made to put the thing down," Bruns said. "It feels like that is more about me being told what to do by people I am paying to do something for me."

Ayana Resort and Spa in Bali, Indonesia, understands that, so it tries to meet guests halfway. Its winding River Pool bans phones for eight hours every day. But it invites guests to take photographs and publish on social media at other times.

promote – v. to help bring into being

guest – n. someone who pays for the services of a business, such as a hotel

resort – adj. of or related to a getaway for vacations or recreation

pouch – n. a small bag or container carried on the person

habit – n. a normal behavior; a tradition or custom