Vaccine May Have Spread Polio in US, Israel and Britain

Update Required To play the media you will need to either update your browser to a recent version or update your Flash plugin.
By Dan Friedell
22 August 2022


World health officials have nearly caused the dangerous polio virus to totally disappear by using a vaccine given by mouth rather than by injection.

However, that same kind of vaccine is now linked to polio outbreaks in the United States, Britain and Israel.

Researchers studied samples of the virus found in New York, London and Jerusalem and found that it was directly connected to the vaccine. 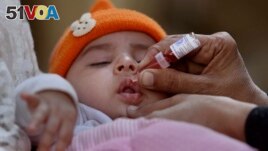 It is the first time in several years that polio virus connected to vaccines has been found in wealthy countries.

History of the vaccine

For over 30 years, two drops of a liquid with a very small amount of the live polio virus triggered an immune response that protected billions of people. It likely saved many people from a difficult life. But it came with a small risk of spreading the disease if other people stopped getting vaccinated.

Polio can cause paralysis: the inability to use one's arms or legs. In some cases, it can also cause death. Former U.S. President Franklin D. Roosevelt got infected with polio in 1921 when he was 39. He used leg supports to stand from that time on.

In recent years, polio has almost totally disappeared from wealthy nations. It is only found in a small number of poor countries in places where it is hard to find clean water.

When the oral vaccine started to be sent around the world in 1988, there were 350,000 cases of polio each year. So far, in 2022, there were 19 cases of "wild polio," meaning polio not spread by a vaccine. The cases were in Pakistan, Afghanistan and Mozambique.

Aidan O'Leary leads the World Health Organization's polio department. O'Leary said the WHO had been centering its efforts on Afghanistan and Pakistan. He called the discovery of polio spreading in New York and London "a major surprise."

Dr. Paul Offit runs the Vaccine Education Center at Children's Hospital of Philadelphia. He praised the oral vaccine but said it may be time to end its use.

"We probably never could have gotten on top of polio in the developing world, but this is the price we are now paying," he said.

Many health experts say they were aware that using a live virus vaccine could someday cause the disease to spread. Because of that worry, countries such as the Netherlands and Norway never used the oral vaccine. Instead, they only used shots with killed virus.

The live virus vaccine sometimes changes into a form that can spread and cause paralysis. It happens because recently vaccinated people can spread the live virus in their waste. Sometimes the virus spreads further.

O'Leary said he believes the U.S., Britain and Israel will work quickly to stop the virus spread. In London, young children are now being offered an additional, or booster, shot.

In New York, health officials said they do not think the virus will continue spreading because so many people are vaccinated.

Health officials have documented cases of the virus spread by the vaccine in past years. In 2020, there were over 1,000 cases spread among a large number of countries. This year, only about 200 have been found.

More and different vaccination may be needed

Experts say more vaccination is necessary even in developed countries in order to stop the spread, but they are worried that people are less trusting of vaccines today than in the past.

Scott Barrett is a professor at Columbia University in New York City who studies polio. He said vaccine pushes may be difficult today because of what he called "a reduction of trust of authorities and the political polarization in countries like the U.S. and U.K." U.K. is short for the United Kingdom or Britain.

One expert is concerned that health leaders are saying the current outbreaks are connected to the vaccine. Oyewale Tomori is a virus expert in Nigeria who worked on the African nation's effort to eliminate polio. He said it might have been better to use a different vaccine but "nobody knew it would turn out like this."

He called the situation complex and noted that "all we can do is explain how the vaccine works and hope that people understand immunization is their best protection."

trigger–v. to cause something to start happening

immune –adj. able to not be affected by a disease

authorities –n. (pl.) people who have power to make decisions and enforce laws

polarization –n. to cause people to separate into opposing groups