Vaccine Mistrust for Some Dates Back to Experimental Study

Update Required To play the media you will need to either update your browser to a recent version or update your Flash plugin.
By Anna Matteo
07 February 2021


In the early days of the coronavirus pandemic, Lucenia Dunn was careful. She urged people in her area to wear face masks and keep a safe distance from one another.

Dunn lives in Tuskegee and was once mayor of this town in the southern state of Alabama. But now that COVID-19 vaccines are becoming available, Dunn says she has no plans to get her injection right away.

"I'm not doing this vaccine right now," Dunn told The Associated Press. "That doesn't mean I'm never going to do it. But I know enough to withhold getting it," she added, "until we see all that is involved."

The coronavirus vaccine campaign is off to a slow start in Tuskegee and surrounding areas. Community leaders point to a resistance among residents caused by a distrust of government promises and years of failed health programs.

The town is known for being the place where a major government study on the sexually transmitted disease syphilis was carried out on a group of Black men. Most of Tuskegee's 8,500 residents have family members who were part of the experiment. Government investigators later declared the experiment unethical. 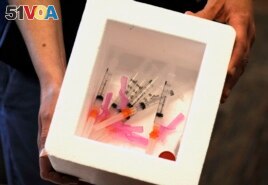 A nurse holds a cooler of COVID-19 vaccine at the Macon County Health Department in Tuskegee, Ala., Monday, Jan. 25, 2021.

What was the Tuskegee study?

The Centers for Disease Control and Prevention describes the study on its website. The research began in 1932 with 600 Black men - 399 had syphilis and 201 did not. The men were not informed about the true purpose of the study. Researchers instead told them they were being treated for "bad blood."

In truth, the CDC says, the men did not receive the necessary treatment to cure their sickness. Even when penicillin became the drug of choice for syphilis in 1947, researchers did not offer it to the men. The study -- which was supposed to last only six months -- ended up lasting 40 years. As a result, many people in Tuskegee remain suspicious.

"It does have an impact on decisions," said Frank Lee, who grew up in the community. Lee, who is Black, is director of emergency services for the area that includes Tuskegee. He said the history of the Tuskegee syphilis experiment still affects the way people think today.

However, Lucenia Dunn -- who is also Black -- says her distrust is rooted in other reasons. She says the government is using a vaccine that was rushed. The government has also not seemed able to carry out good virus testing or provide continuous quality health care for rural areas, Dunn added.

Health experts have repeatedly said that the vaccines are safe and very effective. They have noted that even though they were developed with record-breaking speed, the vaccines are based on many years of earlier research.

The vaccines being used in the U.S. have so far shown no signs of serious side effects in studies involving tens of thousands of people. Across the U.S., more than 26 million injections have been given with no major health concerns reported.

Distrust among the Black community is not just a problem in Tuskegee. A December 2020 public opinion study showed that 40 percent of Black people nationwide did not plan to get the coronavirus vaccine.

The Chicago-based Black nationalist group Nation of Islam is warning its members not to receive the vaccines. The group has an online presentation called "Beyond Tuskegee: Why Black People Must Not Take The Experimental COVID-19 Vaccine."

Fred Gray is now 90 and still works as a lawyer in Tuskegee. He rejects such comparisons. He said the syphilis study and the COVID-19 vaccine are completely different. He has gotten the vaccine and is publicly urging others to do the same.

Georgette Moon has a similar plan: she wants to protect herself and tries to persuade friends who are resistant to the vaccines. She said she hopes more Black residents will be able to overcome their fears and get vaccinated.

"The study is a huge factor," Moon said. "I've had very ... well-educated people tell me they are not going to take it right now."

A leader of one of the oldest churches in Tuskegee is advising people in his church to get vaccinated. Reverend John Curry Jr. said he and his wife got vaccinated without having to wait a long time.

Yet Curry said he understands the power of remaining distrust in Tuskegee. It is a town that will forever be linked to the syphilis study -- one of the most shameful incidents in U.S. public health history.

"It's a blemish on Tuskegee," he said. "It hangs on the minds of people."

Reporters at the Associated Press wrote this story. Anna Matteo adapted it for VOA Learning English. Bryan Lynn was the editor.

transmit – v. to cause a virus, disease, etc. to be given to others

rush – v. to move forward or progress without preparation

persuade – v. to cause (someone) to do something by asking, arguing, or giving reasons

blemish – n. a fact or event that causes people to respect someone or something less