Update Required To play the media you will need to either update your browser to a recent version or update your Flash plugin.
By Bryan Lynn
05 May 2022


A new housing center for the Vatican's Swiss Guard force will reportedly accommodate both male and female members.

The purpose of the force is to guard the residence of Pope Francis, as well as all official entrances to Vatican City in Rome, Italy.

Currently, only males are permitted to serve in the Swiss Guard. 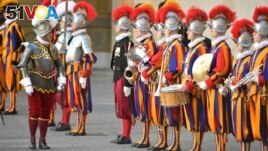 FILE - Swiss Guards attend a swearing-in ceremony at the Vatican, May 6, 2021. (Vatican Media/&#173;Handout via REUTERS)

A Swiss organization is raising money to build the new housing center – also called a barracks. The organization signed an agreement with the Vatican's Secretary of State on May 4.

An official with the Foundation of the Pontifical Swiss Guard told Reuters the agreement calls for the new barracks to have single rooms with private bathrooms. The barracks where the Swiss Guard now live is a shared space.

The official, Riccardo Boscardin, said there were two reasons the new barracks will have the ability to separate Guard members. "One is because COVID hit when the project started and the second is the possibility of integrating women into the guard," he said.

When asked about the possibility of women joining the force, Boscardin said, "this decision is not ours, but exclusively that of the Vatican and the pope."

The rule requiring Guard members to be male goes back to the year 1506, when the force was created. Members must also be Catholic, unmarried and have Swiss citizenship.

The 85-year-old Pope Francis has already named women to several high positions in the Vatican administration. In March, he introduced a new constitution that permits any baptized Catholic, including women, to head most Vatican departments.

The Foundation of the Pontifical Swiss Guard is seeking to raise about $46 million to replace the current barracks, Boscardin told Reuters. He said work was expected to begin in January of 2026. That date was chosen so members would not be displaced during the 2025 Holy Year, when millions of visitors are expected to travel to the Vatican.

accommodate – v. to provide what is needed or wanted for something

residence – n. where a person lives

integrate – v. to combine two or more things to make something more effective

exclusive – adj. not shared with everyone

baptism – v. a religious ceremony held when a person officially enters a religion

replace – v. to take the place of something else

displace – v. to make someone or something leave their usual place or postition

site – n. the place where something happens