Update Required To play the media you will need to either update your browser to a recent version or update your Flash plugin.
By Andrew Smith
22 December 2022


Foie gras is a popular Christmas dish in France. Its name means "fat liver" in the French language. It is traditionally made from fattened duck and goose livers.

But vegan and other plant-based alternatives to foie gras are becoming more popular. A severe bird flu this year has decreased the number of ducks as well as the supply of foie gras. Production is expected to fall 30 to 35 percent from last year, while prices will likely rise about 20 percent.

French chef Fabien Borgel runs the "42 Degres" vegan restaurant in Paris. He created what he calls a "faux gras" two years ago. "Faux" means fake or false in French. Borgel's vegan foie gras contains cashew nuts along with sunflower and coconut oil. It looks like traditional foie gras but is a little softer. 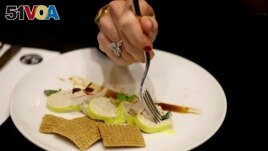 A woman eats 'Faux-gras', a vegan alternative to foie gras, in the restaurant "42 Degres" in Paris France, December 15, 2022. (REUTERS/Sarah Meyssonnier)

Borgel says the decrease in supply of traditional foie gras could make more people want to try such alternatives. 42 Degres is putting its "faux gras" on its menu from December through February.

Foie gras was officially classified as part of the "cultural and gastronomic heritage" of France. However, some countries and places have considered banning it because of worries about the treatment of ducks and geese. Animal rights activists are against foie gras because the ducks and geese must be force-fed in order to enlarge their livers.

"You have people that have never tasted foie gras and will never taste it and they want something festive for the year-end parties. Others want to change the way they eat and are heading towards alternatives," Borgel said.

However, not everyone in France is ready for those alternatives. A recent public opinion study released by French foie gras producers found that 77 percent of French people were not ready to change from traditional foie gras to plant-based versions.

dish -n. food that has been prepared in a particular style, often from a combination of ingredients.

alternative -n. another choice or possibility

heritage -n. the cultural history and traditions of a group or society