Update Required To play the media you will need to either update your browser to a recent version or update your Flash plugin.
By Jonathan Evans
14 January, 2018


Venezuela was once one of the wealthiest countries in Latin America.

Today, images of poor Venezuelans eating from food waste in Caracas are evidence of the country's deepening economic crisis.

Young men and boys often search the dirty waters of the Guaire River for small pieces of metal that might help feed their families.

One of those young men is 26-year-old Angel Villanueva. He searches the dirty, brown water for lost rings or other objects he may be able to trade for money.

"Working in the Guaire isn't easy," he told the Associated Press. "When it provides, it provides. When it takes, it takes your life."

The waters of the Guaire are known for being filthy. The river acts as a drain. It carries away rainwater from the streets and sewers, as well as industrial waste.

Alejandro Velasco is a native of Caracas and teaches Latin American history at New York University. He says ,"As long as I can remember, the Guaire was this open sewage. It certainly seems to reflect the depth and extent of the desperation that this particular crisis has spawned."

Venezuelans have lived under socialist rule for nearly 20 years. During that period, food and oil production have dropped sharply. Poor organization of state resources and a drop in world oil prices have made many Venezuelans desperate. 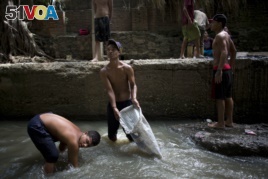 In this Nov. 30, 2017 photo, Douglas, center, holds a sack in the polluted Guaire River as he and others pull mud up from the bed of the river in search of gold and other valuables to sell, in Caracas, Venezuela.

Each morning, people go to the Guaire River from nearby neighborhoods to search for treasure. Some cover their fingertips in tape to protect from cuts and infections. They largely ignore any possible long-term health effects from standing in dirty water for hours each day.

Calls to clean up the river and the large amount of money already spent have had no result.

Seven years later, the Inter-American Development Bank provided a $300 million loan to build wastewater centers and treat waste that goes into the river.

Nearly six years later, the water remains filthy. Bank officials refused to comment on the project. Venezuelan government leaders have also been silent on when the Guaire might be cleaned.

Some parts of the river smell of sewage. Other parts produce a toxic, harmful smell.

Most days, the treasure hunters go unnoticed by other people as they drive vehicles over the river on a major road.

Angel Villanueva lives with his father in one of the poorest and most dangerous parts of Caracas. The son wanted to earn money, but he could only get low-paying jobs, such as cleaning the streets. The lowest legal wage for public employees in Venezuela is less than $7 a month.

Food has become increasingly hard to find or very costly. One recent study estimated that 75 percent of Venezuelans lost an average of 8.7 kilograms last year.

Angel Villanueva first started searching in the river six months ago. His first day's work resulted in finding $20 worth of materials. People back in his neighborhood often tell him to keep away because he smells like the Guaire.

Villanueva dreams of leaving Venezuela to find a better job. But for now he is taking his chances searching for treasure in the river.

Scott Smith reported this story for the Associated Press. Jonathan Evans adapted his report for Learning English. George Grow was the editor.

desperation – n. a strong feeling of sadness, fear, and loss of hope

resources – n. supplies of something such as money that someone has and can use when it is needed

spawn – v. to cause something to develop or begin; to produce or create something