Update Required To play the media you will need to either update your browser to a recent version or update your Flash plugin.
By Christopher Jones-Cruise
22 August, 2017


When Omar Romero hit a walk-off triple to beat the Dominican Republic, his teammates mobbed him to celebrate the win like any team would.

The young baseball players from Venezuela are playing in the Little League World Series in South Williamsport, Pennsylvania this year.

Even though their country is suffering from a severe economic recession, they were able to come to the United States with the help of some major league baseball players from Venezuela. 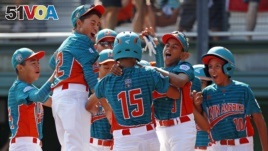 Rougned Odor plays for the Texas Rangers. He learned to play baseball in Maracaibo, Venezuela. The Venezuelan team that is playing in the World Series is from the town.

"I know everybody on that team, in that league," Odor told the Associated Press news agency in Texas recently. "And that's why I tried to help those kids."

The players had to fly to Caracas to get their visas -- permission to go to the United States. Odor paid for their plane tickets.

The visas cost about $170. San Diego Padres player Jhoulys Chacin paid for their visas. Chacin also came from Maracaibo and played on a Little League team in Venezuela in 2000.

"I know how big a deal it is for the young guys, so they deserve to go," Chacin said Sunday in San Diego. "I'm glad I could help them come here to play in the Little League World Series. That was one of my dreams when I was young."

Only three parents of players on the Venezuelan Little League team were able to travel to Pennsylvania. A man from Venezuela who now lives near Williamsport let them stay at his house.

The Associated Press news agency reported this story from South Williamsport, Pennsylvania. Christopher Jones-Cruise adapted the report for Learning English. Hai Do was the editor.

celebrate - v. to do something special or enjoyable for an important event

major league baseball - n. one of the four major professional sports league in the U.S.