Update Required To play the media you will need to either update your browser to a recent version or update your Flash plugin.
By Bruce Alpert
07 January, 2016

It was the first time in 16 years. 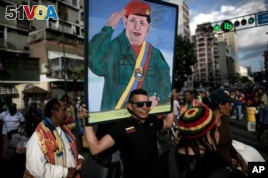 During Tuesday's opening session, members of both the Democratic Unity and Socialist Party loyal to President Maduro shouted at each other.

The two sides chanted slogans at one another. They also said the other was corrupt and disloyal, Reuters reported.

On Tuesday, veteran opposition legislator Harry Ramos was elected to lead the Assembly.

"What did we offer in our campaign? To recover the autonomy of the legislative branch," Ramos said in his opening speech, according to Reuters. "This has been the loudspeaker of the presidential palace, the echo chamber of the executive branch."

Ramos said there will be big changes.

There were other signs of a power switch in the assembly. A portrait of the late President Chavez that hung in the assembly chamber was removed. And reporters were able to walk freely on the floor of the assembly for the first time in years.

It remains a big question how much the new assembly can fix the nation's economy. The socialist government led by Maduro controls agencies that decide major economic policies.

Leaders of the new majority promise to deal with shortages of food, drugs and other things people need daily. But they have not offered specifics.

First on the agenda is legislation to free opposition activists jailed for protesting the Maduro government, Reuters reported.

The Democratic Unity coalition also wants to grant property titles for citizens who received homes from the government. Party members said it will ease residents' concerns they could lose their homes at any time.

In the December elections, the opposition coalition won 112 seats. That represents a two-thirds majority – enough to put legislation blocked by Maduro to a referendum. It is also enough to draft a new constitution.

But the Venezuela Supreme Court in December blocked three opposition members from taking their seats, according to news reports. The court ruled that election fraud charges must be investigated. The Democratic Unity Coalition said the December ruling amounted to a "judicial coup."

For now, the coalition lacks a two-thirds majority.

Bruce Alpert adapted this story for VOA Learning English based on reports from the Associated Press, Reuters and other news sources. Kathleen Struck was the editor.

chant – v. to say a word or phrase) many times in a rhythmic way usually loudly and with other people

slogan – n. a word or phrase that is easy to remember and is used to attract attention

disloyal – adj. failing to support or be true to someone or something

veteran – adj. someone who has a lot of experience in a particular activity

loudspeaker – n. a device that is used to make sound such as a person's voice louder

echo – adj. the same position as someone else