Venezuela’s Opposition to Step Up Street Protests after Referendum

Update Required To play the media you will need to either update your browser to a recent version or update your Flash plugin.
By Bryan Lynn
17 July, 2017


Venezuela's opposition leaders called for more street protests Monday. The call for action came after more than seven million Venezuelans voted in an unofficial referendum at more than 2,000 locations on Sunday.

The referendum included three questions. One dealt with Maduro's proposal to create a new legislative body to rewrite the 1999 constitution. Voters overwhelmingly rejected the proposal, according to academics who monitored the vote.

In response to another question, voters urged the military to defend the current constitution. They also pledged to support new elections before Maduro's term ends in early 2019.

The referendum was seen as symbolic because it was not part of an official government election. Maduro dismissed the voting as unconstitutional. He said it would have no effect on the government or his political proposals. 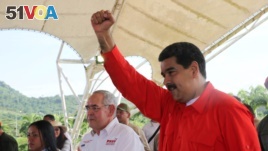 Maduro has set a July 30 vote to create the Constituent Assembly. The legislative body would have the power to rewrite the constitution and dissolve state institutions.

The opposition has accused Maduro of seeking to build up the proposed new assembly with his supporters. They say this would allow him to remove the few remaining checks on his power and create a Cuba-style system controlled by his socialist party.

Julio Borges is president of the opposition-controlled National Assembly. He said the large voter turnout should be seen as a message to the government that "democracy is not negotiated."

On Monday, Venezuelan opposition leaders called on supporters to increase street protests as another way to show opposition to Maduro's planned July 30 election.

Political observers said Sunday's large turnout was an important show of support for the country's opposition. But they also noted that the number of voters fell short of the opposition's 7.7 million showing in the 2015 legislative elections. It was also less than the 7.5 million votes Maduro got when he was elected in 2013.

Opposition leaders said the lower number was the result of having to organize the balloting quickly and at limited locations.

Some experts said the referendum result would likely cause the international community to take a stronger position against Maduro's planned vote.

One woman was killed at an opposition-voting site at a church in western Caracas that was surrounded by government supporters. Witnesses said hundreds of people became trapped in the church. Four people were wounded.

Violence during opposition protests over the past few months has left at least 93 people dead and 1,500 injured.

Bryan Lynn adapted this story for VOA Learning English, based on reports from VOA News, the Associated Press and Reuters. Hai Do was the editor.

referendum – n. vote in which all voters cast ballots to decide an issue rather than representatives in government

fraudulent – adj. something dishonest or illegal