Update Required To play the media you will need to either update your browser to a recent version or update your Flash plugin.
By Mario Ritter
16 May, 2016


After declaring a state of emergency, Venezuela's President Nicolas Maduro threatened to seize closed factories and arrest their owners.

At a rally over the weekend, Maduro told supporters that owners of closed factories are "trying to sabotage the country." And he accused the United States of trying to destabilize Venezuela.

The state of emergency gives Maduro increased powers for 60 days.

Venezuela's economy has been severely affected by low oil prices. Venezuela is a member of OPEC, the Organization of Petroleum Exporting Countries and a major oil producer. Yet, the lack of trade in oil means the country is having a hard time paying for imported materials it needs. 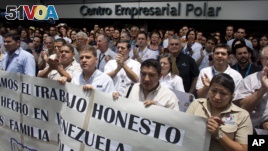 Polar workers who fear losing their jobs protest outside company headquarters in Caracas, Venezuela, Friday, April 22, 2016. Polar, the largest producer of beer in the country, said Thursday the lack of imported raw materials.

Last month, the country's largest food and drink distributor, Polar, shut down its last beer plant. The company said it is unable to get hard currency to buy raw materials.

The political opposition in Venezuela now says an effort to recall the Venezuelan leader is gaining traction. Anti-government activists say they have collected 1.8 million of the 4 million signatures required to force a recall vote of the president.

On Saturday, thousands of protestors appeared in the streets of Caracas in support of a recall referendum. However, if the Venezuelan president is removed, his vice president would take the top office.

"Inflation is approaching 1000 percent annually. The economy is going to shrink by probably around 10 percent this year. It's a country that is economically destitute."

Jones added that political tensions in the country are very high. The analyst noted that Maduro, and Hugo Chavez before him, mismanaged Venezuela's economy. The current situation, he suggested, would not be too different if oil prices were high.

Victor Beattie reported this story for VOA news. Mario Ritter adapted it with additional material from Jashua Fatzick. Hai Do was the editor.

We want to hear from you. Leave your thoughts in the comments section below.

destabilize –v. to cause to not work in the desired way, to make unstable

distributor –n. a company that supplies stores or businesses with needed goods

hard currency –n. money from a country with a strong economy that is widely used and is not likely to lose value sharply

traction –n. support or interest needed to cause something to happen

thriving –adj. to do well