Update Required To play the media you will need to either update your browser to a recent version or update your Flash plugin.
By Susan Shand
31 August, 2018


Among the things that the Centeno family of Venezuela brought to Brazil is a lot of a natural fiber called fique.

"I knew we were going to need it," said Maria Centeno, whose age is unknown, even to her children.

She and her family are Warao, a name that means "boat people." They are members of an indigenous community that lives in the Orinoco Delta of Venezuela. Other community members live in nearby countries, such as Guyana and Trinidad and Tobago.

The Warao use fiber taken from the leaves of the fique to make hats and other products.

Since the Centeno family arrived in the city of Boa Vista, in northeastern Brazil, they have earned money by selling their hand-made goods. They also have resold copper and asked strangers for donations. 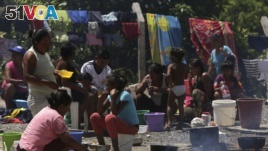 In this March 10, 2018 photo, Waraos from Venezuela prepare meals in an outdoor area of a shelter in Pacaraima, the main entry point for Venezuelans, in the Brazilian northern state Roraima. (AP Photo/Eraldo Peres)

The family lives in the Pintolândia shelter in Brazil.

Life in the shelter

More than 600 Venezuelans from indigenous tribes are staying in the shelter. It receives money from Brazil's government and non-governmental agencies, such as the United Nations refugee agency and the Adventist Development and Relief Agency.

The shelter was once a sports center. Hundreds of hammocks, provided by the non-governmental organizations, are hung in the open space for places for people to sleep. There are also several large tents, where Venezuelan migrants and refugees live and rest. At the end of each day, the children play football in a cleared space.

The Warao are one of the indigenous groups who have been forced to leave Venezuela because of its economic and political crisis. UN officials say food shortages, rising inflation and violence in the country have forced them to cross borders in search of humanitarian aid.

Jesús Gutiérrez, chief of his Warao tribe, says that the situation in Venezuela was difficult for his community.

"We are farmers and artisans, but there is no one who buys [our products] in Venezuela," he said.

But not many people in Brazil are buying either. The Centeno family say their products are not selling well. Most of the time, family members have to ask for money on the street.

Some men have asked younger Centeno females for sex in exchange for money.

"The [men] arrive and show you the money. Once, a guy told me, you're so pretty, what are you asking for [money]?" said 19-year-old Erica Gonzales.

Warao tribes are made up of several families. Gutiérrez's, for example, has 600 members, of which 75 are in Boa Vista.

In Pintolândia and in five other camps in Boa Vista, her agency provides migrants with products needed for cleaning and cooking.

Chief Gutiérrez says that sometimes problems arise in the camps.

"We are not used to sleeping like this, all together," he said, adding that he has to watch his possessions closely so they are not stolen.

But, he also said, the camp is better than Venezuela where he could not feed his family.

Alejandra Arredondo reported this story for VOANews. Susan Shand adapted his report for Learning English. George Grow was the editor.

fiber – n. a thin thread of natural plant material that can be used to make cloth or paper

indigenous – adj. produced, living, or existing naturally in a given area or environment

leaves – n. parts of a plant or tree

hammock – n. a type of bed that consists of a piece of cloth hung between two trees, poles

tent – n. a temporary shelter, usually made of cloth