Update Required To play the media you will need to either update your browser to a recent version or update your Flash plugin.
By Bryan Lynn
23 October, 2018

The United Nations recently estimated more than 4,000 Venezuelans are crossing the border into Colombia each day. The U.N. says many of them seek international protection and are in need of aid.

For those remaining, the economic pressures in Venezuela can make daily life difficult. One teenager has found a way to express his feelings about the difficult situation in his country.

But a few years ago, he began creating pictures of people dealing with the country's economic issues. The problems include severe inflation, migration and shortages of food and medicine. 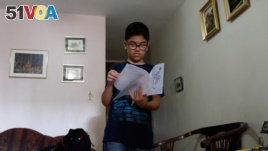 "Kids start to realize (what is happening)," Moncada said. "Because they do not go to the movies as much, they realize they cannot stay in the street late, there is not as much food in the house or the same products."

One of his drawings shows an increasingly common sight in Venezuela, people eating from waste containers. His cartoon shows two rats standing below a collection of waste as humans dig through it. One rat asks, "Where's the food?" The other answers, "They have taken it from us."

In another, an image representing Lady Justice is seen fleeing Venezuela with a sword in one hand and a travel bag in the other.

One cartoon shows a crying boy telling his father he does not want school to start again. His worried father – who is looking at a list of costly school supplies – answers, "Me neither, my son."

In another drawing, a Venezuelan citizen is seen running toward an alien spaceship, begging for help.

Moncada's mother is Cecilia Gonzalez, a 46-year-old radio reporter. She says she started to publish her son's cartoons on her Facebook page in late 2016. Shortly after that, a friend asked if she could publish them on her news website. Since then, the cartoons have appeared on the news site weekly.

Moncada's mother said that, at first, her family thought it might be better to try to shelter Moncada from the reality of Venezuela's problems. But she gave up once the difficulties became increasingly clear.

"Nothing is like it used to be, and they realize that," Gonzalez said. "You bring your kids to school and there are three or four children eating out of the garbage on the corner."

Moncada said his cartoon art is a way to deal with his own feelings and experiences while sharing them with others.

"The drawings are a way to express myself," he said. "I think it is a creative, fun, and different way of showing the problems we experience daily."

cartoon – n. a picture that looks at people or objects in a funny way

Lady Justice – n. a female figure that serves as a symbolic representation of the justice system

sword – n. a weapon with a long, metal blade and a handle, used especially in the past

beg – v. ask someone for food or money, because you do not have any

garbage – n. wasted or spoiled food and other unwanted items, such as from a kitchen or household