Update Required To play the media you will need to either update your browser to a recent version or update your Flash plugin.
By Susan Shand
14 December, 2017


In the last month, John Villar has bought plane tickets to Colombia, purchased medicine for his wife, and paid the employees of his business in Venezuela — all in bitcoin.

For two years, Villar could not find the medication needed in Venezuela to treat his wife's serious illness. So he bought them in other countries with bitcoin and used a delivery service to get them to Venezuela.

Like Villar, poor retirees and wealthy business leaders are changing their bolivars, Venezuela's currency, into bitcoins. They used bitcoin to pay for everything from doctor appointments and honeymoons to motorcycles and beer. Some even purchase a small fraction of one bitcoin to build their savings.

The U.S. dollars remain the number one currency for many Venezuelans but finding them can be difficult and requires a black market connection.

Buying bitcoin eliminates the bureaucracy because transactions can be done peer-to-peer. In addition, saving bitcoin does not require a foreign bank account. Venezuelans cannot hold dollars in a local account.

The transactions are easy for anyone with a smartphone: Websites like LocalBitcoin and Colibit work as exchanges where Venezuelans can buy and sell bitcoins using a local bank account.

The move toward cryptocurrencies in Venezuela is taking place as the price of bitcoin has climbed to a peak of more than $17,000 this month. The digital currency debuted on a major U.S. exchange with its first futures contract on Dec. 10. 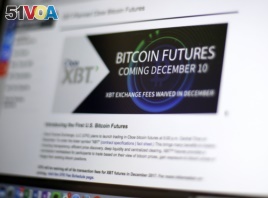 This Friday, Dec. 8, 2017, photo shows the Chicago Board Options Exchange website announcing that bitcoin futures will start trading on the CBOE on Sunday evening, Dec. 10.

The number of Venezuelans using cryptocurrencies is unclear. But weekly bitcoin trading numbers from one website in Venezuela has soared from about $225,000 earlier this year to nearly $2.1 million in the first week of December.

While the price of bitcoin is very unstable, Venezuelans unable to exchange their bolivars for another currency say bitcoin is safer than bolivars.

Rafael Useche is the founder of Colibit. He said, "Venezuelans are taking refuge in digital currencies."

Venezuelan authorities have allowed trading of bitcoin in Venezuela, though they have fined and arrested people who use computers to earn bitcoins by watching online cryptocurrency transactions. Such "mining" operations use large amounts of electricity, which is paid for by the state.

At the bitcoin's current value, one miner computer alone can now earn more than $10,000 in six months.

"It's a really great opportunity for Venezuelans in a desperate position," said Andrea O'Sullivan, a cryptocurrency expert at George Mason University.

Venezuela's President Nicolas Maduro has proposed a government-backed version of bitcoin called the petro. The government met with Venezuelan bitcoin sellers to explore the possibility. Many Venezuelans, however, say they would not use a government-owned cryptocurrency.

Even as the use of bitcoin becomes more common, few businesses admit they accept it. Some fear that they will face criminal activity.

Mariana Leon advises businesses on the use cryptocurrency. She said she has helped several companies in the sugar, chocolate and rum industries to put their bolivares in cryptocurrencies. The moves have kept them in business while other companies closed.

"The only reason they have survived is because they invested in cryptocurrencies," she said.

For Villar, he is developing a computer game using an alternative cryptocurrency called Pepecash. He employs 12 people and all get part of their pay in bitcoin.

Right now, he says, "I don't have any bolivars."

Susan Shand adapted this story for Learning English with information from the Associated Press. Hai Do was the editor.

fraction - n. a portion of an amount

refuge - n. a place that provides shelter or protection

mining - v. the process by which transactions are confirmed and made public via computer code known as block chain

peer-to-peer - n. the practice of lending money to individuals or businesses through online services that match lenders with borrowers.