Update Required To play the media you will need to either update your browser to a recent version or update your Flash plugin.
By Dan Friedell
25 July, 2016

Many Americans are reacting to news that Verizon Communications will buy Yahoo, one of the first big internet companies.

Verizon is a telecommunications company in the United States. It provides wireless service for cell phones and other mobile devices. 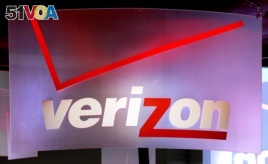 FILE - A Verizon sign is seen displayed at an electronics show.

Yahoo opened in 1994. Back then, it offered a guide to websites on the internet. The company later graduated to email, web searches and news.

Yahoo made money by selling advertising on its pages. In the late 1990s, the company may have been worth as much as $125 billion.

But its business has been struggling for a number of years. Some observers say Yahoo had trouble staying relevant as the internet developed. Google is now the most popular search engine in the U.S. Also, social networks like Facebook have changed the way people use the internet.

In 2008, Microsoft tried to buy Yahoo for $44 billion, but its offer was rejected.

Many people were surprised how far the one-time internet giant fell.

The business magazine Forbes called the agreement with Verizon "the saddest $5 billion deal in tech history."

Critics noted how much money Yahoo's chief Marissa Mayer made in her time with the company. She left her job with Google in hopes of reviving Yahoo in 2012. Mayer earned over $200 million in her four years. She is expected to stay with the company until Verizon takes over early next year.

One person compared her earnings to the total amount of a recent U.S. lottery jackpot.

Yahoo officials say they have no plans to sell the company's shares in the Chinese online shopping company Alibaba. They are said to be worth about $40 billion.

Do you remember using Yahoo to access the internet in the 1990s? Tell us about it in the Comments Section or on 51VOA.COM.

graduate – v. to move from one level to another usually higher level

revive – v. to make (someone or something) strong, healthy, or active again

jackpot – n. a usually large amount of money won in a game of chance

giant – n. someone or something that is very large or powerful