Update Required To play the media you will need to either update your browser to a recent version or update your Flash plugin.
By Bryan Lynn
20 January 2021

The former senator from California took the oath of office Wednesday. President Joe Biden was sworn in minutes later.

Harris not only became the first female vice president in the nation's history. She is also the first Black person and the first Asian American to hold the office.

After taking the oath, the 56-year-old Harris hugged her husband, Douglas Emhoff, and then gave Biden a fist bump. She is taking over as vice president just four years after coming to Washington as a senator from California. 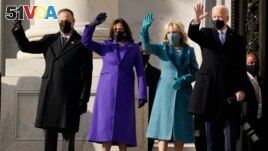 President-elect Joe Biden, his wife Jill Biden and Vice President-elect Kamala Harris and her husband Doug Emhoff arrive at the steps of the U.S. Capitol for the start of the official inauguration ceremonies, in Washington, Wednesday, Jan. 20, 2021. (AP)

Harris used two Bibles to take the oath of office. One belonged to Supreme Court Justice Thurgood Marshall, the late civil rights leader whom Harris has often said inspired her. The other belonged to Regina Shelton, who helped raise Harris during her childhood in the San Francisco area.

Harris entered the race for president in 2019 along with Biden and others, but later ended her campaign. Biden chose her as his vice presidential candidate.

Supporters say Harris' path is especially meaningful because she takes office at a time of deep reflection for Americans about their past and future.

Demonstrations across the country aimed at directing attention to racial injustice and police violence marked 2020. The United States also is dealing with the coronavirus health crisis. Experts say the pandemic has affected Black and minority communities more than others.

Lateefah Simon is a civil rights activist and longtime friend of Harris. "In many folks' lifetimes, we experienced a segregated United States," she told The Associated Press. "You will now have a Black woman who will walk into the White House not as a guest but as a second in command of the free world."

Harris is the child of immigrants, a stepmother of two and the wife of a Jewish man. She "carries an intersectional story of so many Americans who are never seen and heard," said Simon.

Biden, in his acceptance speech, commented on the 1913 march for women's suffrage the day before President Woodrow Wilson took office. He said some marchers were attacked. "Today, we mark the swearing in of the first woman in American history elected to national office, Vice President Kamala Harris," he said. "Don't tell me things can't change."

Harris' mother, Shyamala Gopalan, was a cancer researcher who came to America from India. Her father was an economist from Jamaica. The two met at the University of California, Berkeley and married in 1963. They split in 1971, when Kamala was seven.

Harris has often spoken about the deep relationship she had with her mother, whom she has described as her single biggest influence.

"I was raised to not hear ‘no,'" she recently told CBS News. "Let me be clear about it...it wasn't like, oh, the possibilities are immense. Whatever you want to do, you can do,'" Harris said. "I was raised to understand many people will tell you, ‘It is impossible,' but don't listen," she added.

In India, people in the small village where Harris has family roots gathered to celebrate her taking the oath of office. A ceremony was held at a Hindu temple in Thulasendrapuram, where Harris' grandfather on her mother's side was born.

After completing religious activities inside the temple, villagers went outside to cheer and clap, while some held up pictures of Harris.

"We are feeling very proud that an Indian is being elected as the Vice President of America," said Anukampa Madhavasimhan, a teacher.

The Associated Press reported on this story. Bryan Lynn adapted the reports for Learning English. Mario Ritter, Jr. was the editor.

oath – n. a formal promise to tell the truth

descent – n. people who were your ancestors

fist bump – n. to lightly strike closed hands with someone as a greeting

inspire – v. to cause someone to want to do something or to take action

reflect – v. to think carefully about something

segregate – v. to separate groups because of race or for some other reason

intersectional –adj. between groups or communities of certain areas

suffrage – n. the right to vote in an election