Update Required To play the media you will need to either update your browser to a recent version or update your Flash plugin.
By Caty Weaver
06 December, 2018


The Hollywood Foreign Press Association nominated the political comedy Vice for more Golden Globes on Thursday than any other film. It earned six nominations, including best comedy or musical, best actor and best director. The film, directed by Adam McKay, takes a humorous look at the life and leadership of America's former Vice President Dick Cheney.

Critics have praised Christian Bale's portrayal of Cheney. Some say the actor is unrecognizable in the film.

Other films leading the way are the musical A Star is Born, the historical comedy The Favourite, and the road trip movie, "Green Book." Each received five nominations. 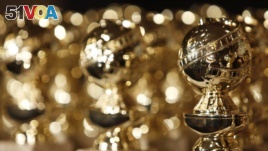 FILE - In this January 6, 2009, file photo, Golden Globe statuettes are displayed during a news conference in Beverly Hills, California

Singer Lady Gaga and actor Bradley Cooper were both nominated in the lead acting categories for A Star is Born. Cooper is also up for best director. And the film earned a nomination for best picture among dramas.

The Hollywood Foreign Press Association will present the Golden Globes at a ceremony on January 6 in the Los Angeles neighborhood of Beverly Hills, California.

Many people see the Golden Globes as a predictor of things to come on Hollywood's biggest night, the Academy Awards. The Oscars, as they are called, will be presented on February 24 in Los Angeles.

The other movies nominated for a Golden Globe in the best musical or comedy category are Crazy Rich Asians, Green Book, The Favourite and Disney's Mary Poppins Returns.

In the drama category, the competition includes two movies that explore racial injustice: If Beale Street Could Talk, and BlacKkKlansman. The Marvel superhero movie Black Panther is also in the race. Bohemian Rhapsody, a film about former musical artist Freddie Mercury, and A Star is Born close out the Globes' drama group.

The Mexican film "Roma" was nominated in the foreign language group. The movie is partly based on the life of its director, Alfonso Cuaron. The film will compete with Lebanese movie Capernaum, Belgian movie Girl, Never Look Away from Germany and the Japanese drama Shoplifters.

Among television programs nominated for Golden Globes are new shows Bodyguard, available on Netflix, and Pose. Bodyguard is a suspense show about a man appointed to protect a British government minister. Pose is about life in 1980s New York. The show has been praised for its use of a groundbreaking number of transgender actors.

drama - n. a play, movie, television show, or radio show that is about a serious subject and is not meant to make the audience laugh

network - n. a group of radio or television stations that usually broadcast the same programs

transgender - adj. of or relating to people who feel that their true nature does not match their sex at birth