Victims’ Relatives to Mass Shooting Suspect: “We Have No Room for Hate”

Update Required To play the media you will need to either update your browser to a recent version or update your Flash plugin.
By VOA
19 June, 2015


Relatives of victims of the South Carolina mass shooting addressed suspect Dylann Roof in court Friday. They offered him forgiveness.

"May God have mercy on your soul," said the mother of the youngest victim, 26-year-old Tywanza Sanders.

"We are the family that love built," another relative said. "We have no room for hate."

Twenty-one-year-old Dylann Roof was charged with the murders of nine people in the shooting at a church in Charleston. All the victims were black. The suspect is white. 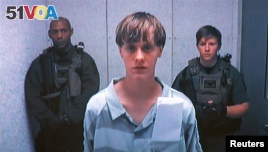 Dylann Storm Roof appears by closed-circuit television at his bond hearing in Charleston, South Carolina June 19, 2015 in a still image from video. A 21-year-old white man has been charged with nine counts of murder in connection with an attack on a histo

The governor of South Carolina described the shooting as a hate crime. She said she wants the state to seek the death penalty.

Representatives of Yemen's government and the rebel Houthi group held their first direct talks this week in Geneva, Swtizerland. The United Nations special diplomat for Yemen said the two sides did not reach a cease-fire deal. He expressed hope that such an agreement can be reached with more meetings.

Military officials in Pakistan say at least 20 militants were killed Friday in an airstrike in a northwestern border area.

A short statement said fighter planes targeted remote areas in the Khyber tribal agency near the Afghan border. The statement also said "about 18 terrorists" were wounded.

The historic Khyber pass serves as one of only two trade and transit routes between Pakistan and Afghanistan.

Two more foreigners in Thailand are being tested for Middle East Respiratory Syndrome.

The two are relatives of an infected man from Oman. They had traveled with the man Monday to Thailand where he was to seek treatment for a heart condition.

All the man's family members have been isolated at an infectious diseases center outside Bangkok.

address – v. to speak to (a person or group)