Update Required To play the media you will need to either update your browser to a recent version or update your Flash plugin.
By Christopher Jones-Cruise
03 January, 2016


Iraqi and Kurdish forces supported by United States' airstrikes have regained territories controlled by Islamic State militants in the past month.

The U.S. military believes the loss of leadership is one of the reasons the group has lost many recent battles. Coalition airstrikes have killed 10 of the IS group leaders. Some of them planned the attacks in Paris that took place in November. Others were planning attacks on other Western targets.

This week, the U.S. military confirmed that an alliance of Kurdish, Christian, Arab and other local forces recaptured the Tishrin hydroelectric dam from the militants. The dam, on the Euphrates River near Aleppo, is part of an important communications route for the IS group. The dam also provides much of the power for northern Syria. 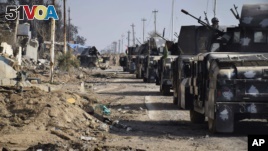 Earlier, the alliance also recaptured more than twenty cities, south of the Syrian city of Kobani, from IS militants.

IS lost control of Ramadi

The Islamic State group has also suffered defeat in the important Iraqi city of Ramadi. The mostly Sunni city was the center of the IS group's control of much of western Anbar province.

Iraqi military officials said Iraqi forces with some help from Sunni tribal fighters recaptured most of the city this week from the Islamic State militants. A U.S. military spokesman said there had been more than 600 airstrikes around Ramadi during the past six months to provide support.

In 2006 and 2007, Sunni tribal forces were a major reason for the success of attacks by U.S. forces on al-Qaida fighters in the area. Iraqi and U.S. officials said the Sunni fighters now controlling Ramadi had a minor role in its recapture. Experts believe local forces must be able to defend the area if the Islamic State group is to be defeated.

Michael Pregent is a former U.S. military intelligence officer and advisor. He said it will not be clear who has won in Ramadi for at least another six months to a year. He said "it is not just the destruction of the city that is a victory -- you have to resettle the population and bring economic stimulus, provide security."

He added that the city has been destroyed. "There is no intact building left, there is little infrastructure that is inhabitable. You can't go there tomorrow and open a store..."

It is not known what happened to the hundreds or even thousands of civilians who were trapped in the city.

Iraqi government leaders said their forces will soon attack the Islamic State group in Mosul, Iraq's second-largest city. Sunnis are a majority of the population there. The militants have controlled Mosul since June, 2014. At that time, IS quickly advanced on and took control of large areas of northern and western Iraq and eastern Syria.

Kurdish forces have defeated Islamic State terrorists to the north and east of Mosul. But they do not want to advance beyond territory they have traditionally lived in.

Iraqi Finance Minister Hoshiyar Zebari said the country needs the Kurds to help retake Mosul. He told the Reuters news agency that they are a "major force" and will be necessary in that battle.

Top Iraqi politicians and experts said if the country's Sunni Muslim population is not empowered, the Islamic State group will not be defeated.

Many Sunnis do not believe Iraq's majority Shi'ite-led government respects them. Shi'ites have led Iraq since 2005. Many Sunnis have become Islamic State militants.

Ayad Allawi is a former vice president of Iraq. He said that victory will not last very long because "there has been no progress on reconciliation. The conditions fostering terrorism will remain if the government does not embark on reform and reconciliatory efforts to engage marginalized Iraqis into an all-inclusive political process based on the rule of law, justice and civil state building."

Allawi told VOA that "without a political strategy, there is only a military victory."

And that's In the News, from VOA Learning English.

This report was based on information from VOANews. Christopher Jones-Cruise adapted it for Learning English. Hai Do was the editor.

stimulus –n. an action or plan that causes growth or development

intact –adj. not broken, having every part, whole

infrastructure –n. the basic structures and equipment needed for a country, area or organization to operate

inhabitable –adj. able to be lived in

foster –v. to help something or someone grow and develop

embark on –v. to begin a journey

reconciliatory –adj. related to causing two people or groups to become friendly after a disagreement

engage –v. to get and keep someone or a group's attention, to be involved in

marginalized –adj. to put in a powerless or unimportant position

all-inclusive –adj. to include everything or everyone