Update Required To play the media you will need to either update your browser to a recent version or update your Flash plugin.
By VOA
21 September, 2012

This week, Mr. Romney's campaign received widespread criticism when comments he made last May were made public. In a secretly recorded video, he dismissed supporters of Mr. Obama as Americans who depend on the government, and see themselves as "victims."

The video appeared on the website of "Mother Jones" magazine. It shows Mr. Romney speaking to possible campaign donors at a private gathering in Florida. 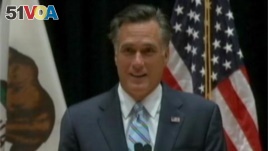 Mitt Romney responds to secret video
MITT ROMNEY:"There are forty seven percent of the people who will vote for the president no matter what. All right, there are 47 percent who are with him, who are dependent upon government, who believe that they are victims..."

The Republican candidate said these Americans believe the government has a responsibility to care for them. He said they think they have a right to health care, food and housing. Mr. Romney said he will never get such people to vote for him.

After the video was released on Monday, Mr. Romney defended his comments. He said he was attempting to show the differences between himself and Mr. Obama.

MITT ROMNEY: "This is really a discussion about the political process of winning the election and, of course, I want to help all Americans. All Americans have a bright and prosperous future, and I'm convinced that the president's approach has not does that and will not do that."

The president reacted to the comments on a television talk show. He noted that in two thousand eight, forty seven percent of voters did not choose him. But in Mr. Obama's words, "One of the things I've learned as president is you represent the entire country."

After the video's release, budget experts hurried to identify the forty seven percent of Americans who depend on government support. The Tax Policy Center, an independent group, said just a little more than forty six percent pay no federal individual income taxes.

But twenty eight percent of those not paying federal income taxes make payroll tax payments. This money is taken from a worker's wages. Payroll taxes provide for Medicare, the health plan for the aged, and Social Security, the government assistance program for retired workers.

About seventeen percent of homes or families pay no income or payroll taxes. Almost all of those households are identified either as older adults or very needy people.

Almost no one in the United States pays no taxes at all. There are taxes on companies, on imports and on inheritance, money or other property passed down by people who have died. There are also state and local taxes, and taxes on property, sales and gifts.

The criticism of Mr. Romney left him at first defending his position, then taking to the offense. For example, he criticized comments that President Obama made on Thursday. Mr. Obama stated that, you cannot change Washington from the inside, and can only change it from the outside.

The former governor said he can and will change Washington and will get the job done from the inside. In his words, "Republicans and Democrats will come together."