Vietnam Is Following China in its Economic Development

Update Required To play the media you will need to either update your browser to a recent version or update your Flash plugin.
By Xiaotong Zhou
03 June, 2018


Experts say Vietnam is copying China in its efforts to grow economically and is only about 10 years behind its larger neighbor.

In many ways, the two countries are competitors. But they have built up their state-controlled economies on job creation through factory work for export.

China opened up to foreign investment in 1978. Vietnam got started 10 years later.

Now Vietnam is learning to deal with corruption, traffic problems and the sinking performance of state-operated companies while the country's middle class grows. Experts say the same issues were all signs of development in China.

Currently, Vietnam's National Assembly is examining a bill to let the country have three special economic zones. The bill is likely to pass this month. 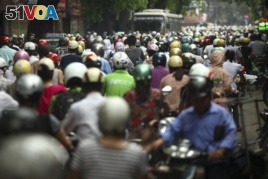 n this photo taken Monday, May 21, 2012, motorcyclists drive in rush hour on La Thanh street which is one of the worst traffic jam roads, in Hanoi, Vietnam.

The Vietnamese website VnExpress International says the zones would offer foreigners who invest in factories tariff exemptions. This would free them from paying taxes required of other investors. The website said the proposal would also guarantee long-term leases for land on which factories are built.

This is similar to what China did in 1979, when it created four zones to increase foreign investment. Now, there are 32 such areas.

Song Seng Wun is an economist with CIMB Private Banking. He said Vietnam seems to be copying from what he called the Chinese Communist Party's playbook. He added that, "Vietnam has a Communist Party. So I suppose there is that kind of, if China is doing it, we can also perhaps adapt it to Vietnamese conditions."

Ralf Matthaes is the founder of Infocus Mekong Research, an advisory service in Ho Chin Minh City. He told VOA that governments in both China and Vietnam turned to factory work to employ large, uneducated populations.

In the early 2000s, China's economy heavily depended on factory work, especially for export. It helped drive economic growth about 10 percent every year to 2010. By following a similar path, Vietnam's economy has expanded at more than six percent a year since 2015.

Like China 10 years ago, Vietnam depends largely on production of low-technology exports, such as furniture and car parts. China is moving up to produce more high-tech products and providing more services.

Companies from Japan, Singapore, South Korea and the West often turn to factories in China and Vietnam to save on labor costs. For investors looking for a less costly country, China has become the "world's factory," while some people are calling Vietnam "China+1." 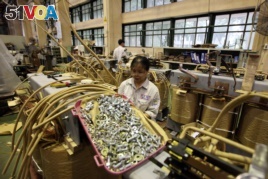 Matthaes said mass manufacturing is one way to employ a lot of unskilled workers. Although Vietnam looks to Singapore as an economic success story, the greatest model is China, he said.

The trade links between Vietnam and Singapore were growing five years ago. At that time, the Vietnamese ambassador to Singapore called relations between the two countries a model.

Although Vietnam depends on the Chinese economy for trade, it thinks of China as a competitor. The two countries fought a border war in the 1970s and now dispute territorial claims to parts of the South China Sea.

The Boston Consulting Group predicts the number of middle- and upper-class Vietnamese will double between 2014 and 2020. It thinks that number could total about one-third of Vietnam's current population of 93 million.

In other signs of following China, Vietnamese workers are known for moving from job to job within a few months for higher pay. Traffic is starting to thicken in the financial center Ho Chi Minh City, as it has in China's major cities, such as Beijing and Shanghai, since 2000.

Observers say it is now Vietnam's turn to make its state-owned businesses perform well or be sold off.

Kevin Snowball is the chief executive officer of PXP Vietnam Asset Management in Ho Chi Minh City. He notes that state-owned enterprises are another feature of communist countries. Such businesses heavily influenced the Vietnamese stock exchange from its creation in 2000 through 2005.

Thousands of Vietnam's state enterprises have been all or partly privatized. China began reforming its state businesses about 20 years ago. It is still pressuring them to change following a drop in profits in 2015.

Snowball told VOA Vietnam established the stock market as a way to sell state assets. Snowball said this is because when the market first opened, almost everything that was listed was state-owned up until the end of 2005.

Snowball said, "The government needs to spend probably 25 billion dollars a year on infrastructure development in order to keep encouraging (foreign direct investment) to come in." The sale of state assets is providing some of the money for that, he added.

AP's Lisa Marie Pane reported on this story. Xiaotong Zhou adapted it for Learning English. George Grow was the editor.

tariff – n. a tax on imports or exports

exemption – n. freedom from having to do something

adapt – v. to change one's behavior so that it is easier to work or live somewhere

+ - short for the words plus or and

executive – adj. relating to the directing of things

infrastructure – n. the system of public works in a country or area

encourage – v. to give support or help; to make something more appealing