Update Required To play the media you will need to either update your browser to a recent version or update your Flash plugin.
By Bryan Lynn
18 May 2021


Officials in northern Vietnam have ordered the closure of four industrial parks because of an outbreak of COVID-19.

The parks, in the province of Bac Giang, are to remain closed until the situation improves. "We hope the measure will be in place for just two weeks, but it depends on the situation of the outbreak," local official Le Anh Duong told Reuters.

Three of the parks house production centers for Taiwan-based electronics company Foxconn, which manufactures iPhones and other products for Apple. Foxconn confirmed its operations in the province had been suspended and said it was cooperating with local officials on the latest virus fighting measures. 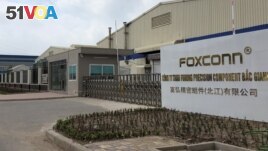 Bac Giang, which sits about 60 kilometers northeast of Hanoi, has been experiencing a new outbreak of COVID-19 that began in late April. Factory workers were among those infected.

The province has recorded more than 400 infections since April 27. That number was about one third of all of the country's COVID-19 cases over the same period, the Ministry of Health said.

Local officials and companies operating in the area of the parks "will together establish a new way to prevent the virus spreading inside the factories," Le Anh Duong said. "We have no choice but to live with the virus."

In January, Vietnam gave approval to a Foxconn-owned company to build a $270 million factory to produce computers and tablets.

Reuters reported last year that Foxconn had decided to move some iPad and MacBook production to Vietnam from China at the request of Apple. The report said Apple's decision was linked to ongoing trade tension between China and the United States.

Foxconn said its other factories in Vietnam were still running. However, operations at those centers could also be changed if further virus prevention measures are ordered, it added.

Vietnam's VN Express website reported that officials in Ho Chi Minh City, in the south, have begun carrying out mass testing of workers in that area's industrial production centers. Additional anti-virus measures were also ordered in an effort to prevent new outbreaks, the officials said.

Hua Quoc Hung heads the local organization in charge of Ho Chi Minh City's industrial production centers. He told VN Express the COVID-19 outbreak in the north was troubling because many workers from the south had traveled to other parts of the country during holidays from April 30 to May 3.

Officials said that since the holiday period, 17,000 workers across the city had been tested for COVID-19.

Reuters and VN Express reported on this story. Bryan Lynn adapted the reports for VOA Learning English. Hai Do was the editor.

outbreak – n. a sudden or violent start of something unwelcome, such as war disease, etc.

province – n. one of the large areas that some countries are divided into

tablet – n. a small, portable computer that you use by touching the screen