Update Required To play the media you will need to either update your browser to a recent version or update your Flash plugin.
By VOA
27 December, 2015

That is because Vietnam is moving closer to reaching a trade deal with the European Union.

Negotiations ended December 2. For Vietnam, the agreement would diversify its trade with nations other than China and the U.S. For Europe, it would increase trade in Asia when attention has centered on the huge, U.S.-supported Trans Pacific Partnership (TPP).

EU officials have praised the Vietnam deal. They say it removes 99 percent of tariffs. The deal would be the EU's first with a developing country. It also could serve as a model for future free trade agreements. 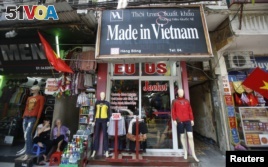 Vendors sit outside a shop selling clothes in Hanoi. Vietnam is seeking trade teals with a number of countries.

Simon van der Burg is the Dutch Consul General in Ho Chi Minh City. He told the European Chamber of Commerce that the deal, "Sets the reference for others in Southeast Asia.

EU trade negotiator Jana Herceg said Vietnam would receive support to increase technology that preserves the environment. Support also would be aimed at the energy, health care and tourism industries.

She said, "The money or the funds which we are giving to Vietnam are broader than just the capacity building related to the free trade agreement."

Economist Dennis McCornac at Loyola University in Maryland questions if the agreement is good for Vietnam. He says the European agreement is less centered on business compared with the 12-nation TPP trade deal. He criticized the TPP as written by corporate supporters.

But both agreements are expected to increase the cost of medicine in developing countries. This is because of stronger rules for patents that will prevent copying. It will extend market rights to makers of some medicines.

"It really is the case that it's going to hurt the poor people, those who can't afford the drugs," McCornac said.

The European Union has tried to reach a single trade agreement with the 10-member Association of Southeast Asian Nations. But those efforts failed.

The EU then changed is strategy, and is negotiating deals with individual governments. Singapore was the first to reach an agreement, followed by Vietnam. Jana Herceg said if the Vietnam deal is finalized, it could set an example and speed up talks with other parties. These could include the Philippines, Malaysia and Thailand.

Herceg predicts the EU-Vietnam agreement will be published by January. Vietnam has been seeking deals with many nations. including South Korea and Israel.

diversify –v. to add different kinds of people or things

patents –n. official permission giving a person or company the right to be the only one to make or sell a product