Update Required To play the media you will need to either update your browser to a recent version or update your Flash plugin.
By Susan Shand
27 January 2021

Then they quickly changed the stories to say the party has introduced several "special cases for re-election to leadership positions at the 13th Party Congress." 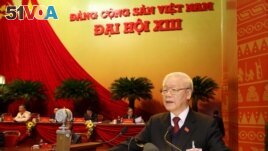 Vietnam's General Secretary of the Communist Party Nguyen Phu Trong speaks at the opening ceremony of the 13th national congress of the ruling communist party of Vietnam is seen at the National Convention Center in Hanoi, Vietnam January 26, 2021. (VNA/Handout via REUTERS)

Trong has already served two terms as secretary general, the top party position, since 2011. He is also the country's president.

At the age of 76, Trong is well over the age limit of 65 for re-election to the party's policy-making Politburo and Central Committee. Current party rules also limit its leader to just two consecutive terms.

On Monday, more than 1,600 delegates began nine days of closed-door meetings at the ruling party's Congress. The Congress is held every five years.

During this Congress, a new leadership team will be chosen. Last month, the names of candidates for leadership positions were declared top secret.

The news organizations, including Tien Phong and VNExpress, said the information about Trong came from Hau A Lenh, a member of the party's Central Committee.

He reportedly said, "The General Secretary and President is one of the over-age nominees and a special case." The information was then changed to remove Trong's nomination.

It was not clear if there were other nominations for the General Secretary position. The party has not made an official announcement. However, the Vietnamese website VN Express reported that another party official said last week that the Party Congress would consider changing the rules for a "special case."

International news organizations, including Reuters and Voice of America, could not reach Lenh. Two other party officials would not comment when asked about Trong's reported nomination.

In Vietnam's political system, power is supposedly shared among four positions: Secretary General of the Communist Party, President, Prime Minister and Chair of the National Assembly.

Since coming to power in 2011, Trong has become Vietnam's most powerful leader. He was the winner of a power struggle against a former prime minister at the last congress in 2016. He also became the third person to hold both positions of party chief and president in Vietnam history.

Trong's campaign against corruption has seen many high-level officials sent to prison, including one politburo member.

Susan Shand adapted this story for Learning English based on information from VOA and Reuters. Hai Do was the editor.

consecutive - adj. one event that immediately follows another