Vietnam Moves Away From Trans-Pacific Partnership

Update Required To play the media you will need to either update your browser to a recent version or update your Flash plugin.
By Christopher Jones-Cruise
14 December, 2016


The election of Donald Trump as president of the United States has caused Vietnam to look for new trade deals.

Vietnam wants to support exports to keep its economy strong if the U.S. Congress fails to approve the planned U.S.-led Trans Pacific Partnership. President-elect Trump also has been highly critical of the trade deal, known as the TPP.

Now, Vietnamese officials are taking steps to keep their country's factories from being hurt if the TPP is not put in place. 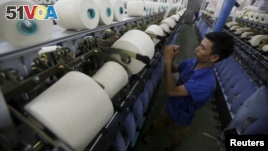 Because the future of the TPP is unclear, observers say, Vietnamese trade officials are seeking markets for their country's manufactured goods. These markets include China, Russia and the European Union.

Twelve nations agreed to the TPP trade deal. Trump has said he will try to remove the United States from the agreement, which was signed in February after 10 years of negotiations. The nations that are a part of the TPP represent 40 percent of the global economy.

Four of the 12 nations, including Vietnam, are in Southeast Asia. Experts believe Vietnam would have been one of the nations that gained the most from the agreement. But Vietnamese officials have worried since the middle of this year that the U.S. Congress would not approve the agreement before its time limit ends in February 2018.

He said, "I think they were already aware the TPP wouldn't work out. I think Vietnam already has lots of free trade agreements signed."

Experts believe the TPP would have increased the size of Vietnam's economy, which is now about $193.6 billion. Trade deals permit exporters to pay lower tariffs or even avoid them when shipping goods into a country that is a trade partner.

International companies that own factories in Vietnam include Intel, Samsung Electronics and major Japanese carmakers.

Vietnam exports an estimated $29.9 billion in goods to the United States. That is more than it exports to any other country. American companies want to expand their operations in Vietnam because their Chinese operations are becoming increasingly costly.

But about a month after the TPP trade agreement was signed, financial experts in Vietnam began to predict that the U.S. Congress might not approve it.

In August, a group led by the Vietnamese deputy prime minister decided to delay the country's approval of the deal until other countries do so. Its next chance to approve the deal will come early next year.

Vietnam and the EU completed negotiations on a trade deal this year. In October, Vietnam joined the five-member, Russian-led Eurasian Economic Union. The agreement gives Vietnam access to a market of 181 million people.

Louie Nguyen started and is the editor of the news website VietnamAdvisors. He believes Vietnam will begin to pay more attention to trade agreements with smaller markets.

"I think the fact that Vietnam has not ratified the TPP is one indication. It would make sense that they would be sending out trade groups doing research in markets that are less competitive," he said.

Fiachra MacCana leads research at the stock trading company Ho Chi Minh City Securities. MacCana says many people are disappointed that the TPP seems to be headed for defeat, but few are surprised. He says another trade deal will be negotiated that will easily take the place of the TPP.

MacCana says Vietnam's economy will be affected if the TPP does not go forward, but it will not be hurt too much.

access – n. a way of getting into or taking part in an activity or place

ratify – v. to make an agreement or treaty official by signing or voting on it

indication – n. something that serves as a sign or points out something

competitive – adj. able to compete; able to do as well or better than others at some activity or in some competition