Update Required To play the media you will need to either update your browser to a recent version or update your Flash plugin.
By Bryan Lynn
21 September, 2017


The Vietnamese government has set aggressive targets for reducing the amount of cash used by people across the country.

The goal is to reduce the amount of ready money changing hands.

The government says it wants to cut the total number of cash transactions nationwide to just 10 percent by the year 2020. The effort is part of a campaign aimed at making it easier for Vietnamese citizens to use banking services.

The campaign calls for greatly increasing the number of electronic transactions for many goods and services. It includes a goal of having up to 70 percent of utility payments made electronically.

Vietnam has already made progress in this area. Many people now make water and power payments electronically at small stores, especially around cities. In the past, people had to either pay in cash at the local post office or wait for a collector to come.

In an effort to cut down on cash payments, banks are using creative methods to reach people who live far from bank offices. For example, VietinBank sends employees on motorbikes to areas outside the city to help its customers do banking. Another company, DongA Bank, sets up vehicles with cash machines near factories for laborers to use. 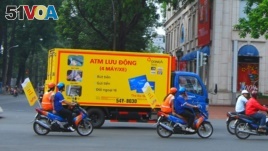 DongA Bank has a traveling vehicle with cash machines to serve customers in many locations. (DongA Bank)

Many businesses also have mobile phone tools linked to banks for people to pay for products and services. While such tools, sometimes called "e-wallets," are now widely available, many people have been unwilling to use them. Experts say the main reason for this is a fear that personal banking information and money can be stolen.

Le Anh Dung is payment director for the State Bank of Vietnam. He recently spoke at a conference dealing with digital payment technologies.

Dung said that such payment methods are good because they make it effortless for people to hand over their money. But he added that because digital payment technologies are still new to many people, cash "will not disappear" anytime soon.

DongA Bank's deputy chief executive officer Nguyen An agrees. He says it will take time for people to trust the new technology. He said many bank employees also did not want to accept electronic pay methods instead of cash when the system was launched about 10 years ago.

The government also hopes digital payments will become more common because online retail sales are growing at a fast rate. Vietnam's e-commerce market was $400,000 in 2015, but it is predicted to grow to $7.5 billion by 2025.

The government is pleased to see that more people are moving to the internet to buy products. But leaders are concerned that 89 percent of Vietnam's online shoppers still choose to use cash on delivery.

Vietnam also has plans to digitize many public services. This means people could make electronic payments someday soon to services such as hospitals and schools.

But for now, the mobile banks will keep traveling the streets in search of new customers.

transaction – n. a deal involving the buying or selling of something

e-commerce – n. activities that relate to the buying and selling of goods and services over the Internet

mobile – adj. able to be moved by vehicles