Vietnam has rejected a report that accuses Vietnamese police of abusing detainees. Vietnam's Foreign Ministry says the country has a "firm commitment" against all forms of torture or cruel treatments. A foreign ministry official said that Vietnamese laws require strict punishment for those involved in abuse.

Earlier in the week, Human Rights Watch expressed concern about abuses by Vietnamese police. It noted an increase in reports of torture and deaths of individuals in police detention, especially in rural areas of the country. The group released a report on the subject. 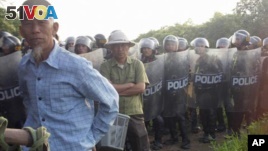 Pham Quoc Nhat says that, at the police station, they were both beaten severely on their arms and legs. He says the next day he could no longer hear the shouts of his friend. Nguyen Tuan Thanh died in detention before police took him to a hospital.

Human Rights Watch says the incident is just one example of widespread abuse of Vietnamese citizens while in police detention.

The report describes 28 cases of people who died while they were being held by police. Some of the deaths reportedly resulted from suicide. Others were from sickness or disease. The group also describes 22 cases of severe beatings, including that of an 11-year-old boy.

Phil Robertson is the deputy Asia Director for Human Rights Watch. He says many Vietnamese have complained about abuse of detainees by police.

"This is a report about farmers, and businessmen, local merchants, students, and others who ended up in police custody for activities that you or I would not consider to be out of the ordinary and, in fact, where laws were broken these were invariably minor infractions -- yet these people ended up dead or injured from beatings inflicted on them by police while they were being held in police custody."

The group says deaths often resulted when police used violence or torture to force people to admit to crimes. It said police were often accused of abuse, but were either not punished or were given light punishment.

The rights group is calling for reforms, more openness about abuse accusations and information about those being held in police detention. It also wants independent investigations of all accusations of police violence.

But officials in Vietnam say they are taking steps to deal with the problem.

Tran Dai Quang is the country's Minister for Public Security. Earlier this month he spoke about the reports of abuse to a committee of Vietnam's National Assembly. He said 19 police officers had been punished. He said they could be charged with crimes because of abuses.

The Ministry of Public Security also said that it had punished police involved in 183 cases over the past three years. Some of the officers were given light punishment. Others were removed from the police force or sent to other areas.

torture – v. to cause severe pain; n. the act of causing severe pain in order to harm, to punish or to get information from

complain – v. to say or write that you are unhappy, sick, uncomfortable, or that you do not like something

foreign - adj. of, about, or from another nation; not from one's own place or country

accuse - v. to say a person is responsible for an act or crime; to make a statement against someone

punish - v. to cause pain, suffering or loss for doing something bad or illegal

crisis - n. an extremely important time when something may become much better or worse; a dangerous situation