Update Required To play the media you will need to either update your browser to a recent version or update your Flash plugin.
By VOA
25 May, 2015


Vietnam might seem to be a good candidate for renewable energy projects. With plenty of sunshine and ocean winds, Vietnam seems like the right place to capture energy from the sun and wind. But there are only three big wind farms producing electricity and no considerable solar investment. That puts Vietnam far behind Indonesia, Thailand and other Asian countries in the development of renewable energy.

Critics say the reason is easy to recognize: price controls.

Vietnam keeps a ceiling, an upper limit, on electricity prices. On average that is about seven cents per kilowatt hour. Investors say they need a feed-in tariff that is at least two times that amount. Feed-in tariffs are policies that give money to renewable energy producers. Renewable energies can be costly to start up and the tariffs would help with the price of production. 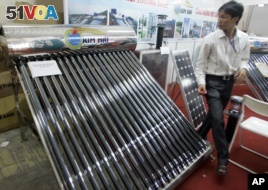 FILE - A solar water heater, left, and a solar panel, right, are seen at Entech Hanoi, an international trade fair on energy efficiency and the environment, at the Giang Vo Exhibition Center in Hanoi, Vietnam.

People working in the power market have suggested other ways to support renewables. These include a reduction in taxes for energy-related training and education. But when talking about electricity in Vietnam, it often comes to the same criticism.

"There's nothing that can make up for a feed-in tariff that's in the single digits," said Daniel Potash, Chief of Party for the Private Finance Advisory Network for Asia Program. The program is part of the United States government's Agency for International Development.

Mr. Potash spoke earlier this month at the U.S.-Vietnam Clean Energy Conference in Ho Chi Minh City. Most people at the conference pushed for Vietnam to develop alternative energy sources, like solar and wind power. But doing so would mean the state power company, Electricity Vietnam (EVN), would raise its prices. This could cause political problems. It might invite criticism from Vietnamese consumers who want low prices and do not trust the state-owned EVN.

Nguyen Anh Tuan is chief editor of the Vietnam Investment Review. His newspaper organized the conference with the U.S. Commercial Service. He said policymakers are trying to find a balance, so Vietnam can have reasonably priced, yet sustainable energy. Based on talks with the Ministry of Planning and Investment, which owns his newspaper, he said, price increases would have to be made slowly.

"If we increase the unit price in different areas, it will cause a negative reaction from society," said Nguyen Anh Tuan. "So that will affect our policy."

In addition to wind and sunlight, Vietnam is working on rules to support energy produced from other sources. These include waste, biomass (such as rice and corn husks), and water currents. Officials are considering the possibility of cutting or suspending taxes temporarily for energy producers, and permitting duty-free imports of machinery. Another idea is promising to buy electricity from companies. It is all part of an official "Green Growth Strategy" that combines economic development with low carbon emissions, or less pollution.

Some businesses are putting in solar equipment for their own use already. The Vietnam Business Forum said that it found many companies would pay more for renewable energy because it can be clean and dependable. The government is also considering ways to let private individuals with solar panels sell their extra electricity back to the power company. Fred Burke, managing partner at Baker & McKenzie Vietnam, called this idea "low-hanging fruit." That means it could be an easy first step.

"It does appeal to the entrepreneurial spirit of the Vietnamese people," he said. "They can each sell to EVN."

But Vietnam also is increasing coal production. Its Master Power Plan VII says that by 2030, coal will supply just over half of the country's electricity, compared with about 30 percent now. This is true despite the country's fears that it could be hurt by climate change, especially changes resulting from pollution. In Vietnam, pollution comes mainly from energy production.

Citizens have protested the arrival of coal-fired power plants in their neighborhoods. In Binh Thuan province, recent protests forced officials to seek pollution-cutting measures. Nguyen Dang Anh Thi works as an advisor to the International Finance Corporation. He calls coal a "time bomb" that also could lead to heavy metal pollution and acid rain.

"It is very clear that this will be a really serious issue and we need to reconsider Master Plan VII," he said at the conference. He added, "I recommend that we review the renewable energy strategy, which has a very low target."

Under the strategy, Vietnam would get 4.5 percent of its electricity from renewable energy sources by 2020, up from 3.5 percent in 2010.

Lien Hoang reported on this story from Ho Chi Minh City. Anne Ball adapted it for Learning English. George Grow was the editor.

renewable energy – n. energy from something that is not used up when used, such as wind or solar power

kilowatt hour – n. a way to measure of electrical energy. One kilowatt hour equals power use of 1,000 watts for 1 hour

consumer – n. a person who gets goods and services; someone who uses something

sustainable – adj. can be kept at a set rate

despite – prep. something that is true, or will happen even though something could prevent it from happening