Update Required To play the media you will need to either update your browser to a recent version or update your Flash plugin.
By Mario Ritter
27 January, 2016

The 71-year-old Trong pushed back a challenge to a seat on the 19-member ruling politburo from Prime Minister Nguyen Tan Dung. Dung carried out a series of economic reforms during his years as prime minister. Those measures helped Vietnam increase foreign investment. 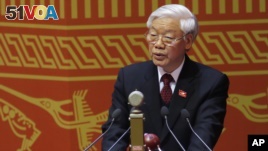 Nguyen Phu Trong was re-elected general secretary of the Communist Party of Vietnam.

Nguyen Phu Trong is considered a more conservative leader who supports closer ties with China. However, observers say he will likely to continue Dung's economic reform agenda and position on China's territorial claims.

Dung will continue as prime minister until later this year. Observers expect his replacement will be Deputy Prime Minister Nguyen Xuan Phuc.

Richard Green reported this story for VOAN ews . Mario Ritter adapted it for Learning English. George Grow was the editor.

challenge – n. an invitation to compete in a game, fight or political competition

politburo – n. the main group of decision-makers in a Communist government

agenda – n. a list of things to be done