Update Required To play the media you will need to either update your browser to a recent version or update your Flash plugin.
By Mario Ritter Jr.
14 December 2021

It is Vietnam's first metro train. People are saying good things about the train line. But others are questioning the project.

The 13-kilometer-long line has 12 stations. It starts at Cat Linh railway station in north-central Hanoi and ends in the southwestern area of Ha Dong. The train can travel at up to 80 kilometers an hour. The trip along the whole line takes about 24 minutes. It is designed to be able to carry 1 million passengers a day when finished. 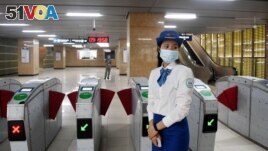 The line is expected to ease traffic and reduce private vehicle use in Hanoi. Citizens in Vietnam's capital said the quality of the service is good. They are hopeful about the metro line.

A Hanoi office worker who asked that her name not be used noted that she cannot use the new line to get to work. But, she said she hopes it will help reduce traffic, shorten travel times, and reduce transportation pressures.

"Since I care about the environment, people's use of public transport will make a significant contribution to reducing dust and noise pollution," she told VOA.

During two-weeks of free trial service at its opening, crowds gathered to ride. But, Vietnamese media last month reported a lack of passengers. Reports from the first days of ticket sales suggest that the number of passengers was low, at about 12,000 a day. That is equal to only eight percent of capacity.

This should worry the Hanoi city government, which oversees the project. Building the line has been delayed by many years and has cost more money than officials planned.

"Leaders of the transport industry have so many times promised to put it into operation, but then the promises are broken, causing people to be angry and skeptical," said Nguyen Van Thanh, a retired worker in Ha Dong.

Dieu Anh works in public relations at a company that deals in property. She told VOA that the people of Hanoi used to have high expectations for the metro line. But after so many missed deadlines, the people were unsure.

"It was not until the metro line operated that I dared to believe that it had finally happened," she said.

Observers say Vietnam lacks the experience to carry out such projects. It is just the second city railway in Vietnam after the Nhon-Hanoi line, which is still being built.

significant –adj. large enough to be noticed and have an effect

capacity –n. the ability to hold or contain people or things — usually singular

skeptical –adj. having or expressing doubt about something

dare –v. to not be afraid to do something

factor –n. something that helps produce or influence a result : one of the things that cause something to happen

aspect –n. the way, or one of the ways, a person, place, or thing appears