Update Required To play the media you will need to either update your browser to a recent version or update your Flash plugin.
By
17 January 2023


The President of Vietnam Nguyen Xuan Phuc resigned Tuesday as an anti-corruption campaign spreads in the national government.

The state-controlled Vietnam News agency reported the resignation took place during a meeting of the ruling Communist Party Central Committee. The agency said the meeting was held "to consider and give opinions on Comrade Nguyen Xuan Phuc's wish to stop holding positions, quit work and retire." The language of the announcement suggested that he was forced to resign.

Phuc also resigned from membership in the Politburo, the executive committee of the Central Committee and as chairman of the National Defense and Security Council. 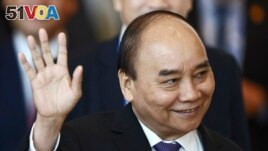 The 68-year-old Phuc started as a local politician in 1979. He joined national government service in 2006. He became part of the powerful Politburo in 2011. Phuc served as prime minister from 2016 to 2021. The National Assembly then elected him president.

As prime minister, Phuc led Vietnam as it increased links to the international economic system. The country reported seven percent economic growth until the COVID-19 pandemic. In 2020, Vietnam was one of the few countries to report any economic growth.

Vietnam established lockdown measures early in the pandemic and saw low numbers of infections during the first year. But, in 2021, more communicable versions of the virus began spreading around the world. By the middle of the year, COVID cases in the country were quickly rising.

The most powerful position is considered to be the general secretary of the ruling Communist Party. Nguyen Phu Trong holds that position. In 2021, he was appointed to a third term. He is known for his campaign against corruption. During his second term, he targeted two former cabinet ministers and Hanoi's former mayor.

State media released an official statement praising Phuc for his efforts to fight COVID-19 as prime minister. But, the statement said, as the country's top executive, he was responsible for wrongdoing involving people under him. That included two deputy prime ministers and three other ministers.

State media noted that the two deputy prime ministers have resigned, and several other officials face criminal charges. In some of the cases, the government is investigating wrongdoing linked to COVID-19 control measures.

quit –v. to give up employment

executive –n. belonging to the branch of government that is charged with such powers as diplomatic representation, superintendence of the execution of the laws, and appointment of officials and that usually has some power over legislation (as through veto)

lockdown –n. an emergency measure or condition in which people are temporarily prevented from entering or leaving a restricted area or building (such as a school) during a threat of danger

deputy –n. a second in command or assistant who usually takes charge when his or her superior is absent