Update Required To play the media you will need to either update your browser to a recent version or update your Flash plugin.
By Ashley Thompson
02 October, 2014


Vietnam is getting a little tired of being known for only coffee and rice exports. Now, the country is hoping to develop its high-technology industry.

Vietnam may not have its own center for high-tech businesses like Silicon Valley in the U.S. state of California, but the country is becoming more important in the worldwide manufacturing system. The country has even attracted major technology companies like Microsoft, Samsung, and Intel.

In 2012, Prime Minister Nguyen Tan Dung signed a plan for developing science and technology. The plan says that by 2020, the value of high-tech products should make up 45 percent of Vietnam's gross domestic product. Gross domestic product, or GDP, is the total value of goods produced and services provided in a country during one year. 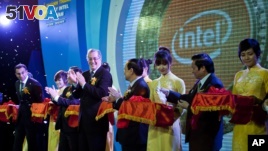 Investors say Vietnam is a good choice because of its location near China and important shipping routes. They also say that Vietnamese value teamwork and have a strong work ethic. Many Vietnamese citizens run family businesses and have a welcoming attitude to foreigners.

Vietnam has a young, tech-savvy population that is highly interested in tablets and smartphones. The country also has a large number of recent college graduates.

However, education remains a work in progress. While school is of top importance to most families, businesses often say that students begin working without necessary skills.

Intel says it tested 2,000 graduates about six years ago. Only 40 of them had the technical ability and language skills the company needed. Since then, Intel has invested millions of dollars to educate Vietnamese students. Sherry Boger is general manager of Intel Vietnam. She said the company sent students to universities in the United States or to an Australian university with a campus in Vietnam. Those who received scholarships work for Intel after they graduate.

Ms. Boger said one problem is that in Vietnamese classrooms, students do not feel they can ask a lot of questions. She said, "And so what we want to be able to see in the workplace is, employees voice out their ideas, their concerns, and that we have a free-flow exchange."

Vietnam will need this educational progress if it is going to continue developing its technology industry.

Vietnam's General Statistics Office said electronics recently became the country's top export, worth $21.7 billion in the first eight months of 2014. But businesses mainly put devices together and package them. They do not create high-tech products. To do that, Vietnam is hoping for technology help from foreign companies.

Word in this Story

export. – n. something sent to another country, usually for sale.

manufacture – v. the process of making products especially with machines in factories